MINISTRY OF ECOLOGY: SITUATION WITH RIVER POLLUTION IN UKRAINE ‘NOT WORSE THAN IN EUROPE’ 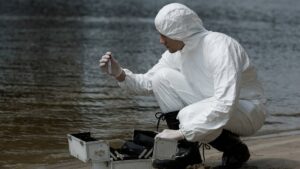 According to the results of screening of the main rivers of Ukraine: Dnieper, Dniester, Siversky Donets, the state of water in the country is not worse than its neighbors in Europe, Deputy Minister of Ecology and Natural Resources of Ukraine Mykhailo Khorev said in a Sunday interview with Dim TV.
“There’s really nothing to be afraid of yet. We can’t say that our condition is much worse than our neighbors in Europe […] We fix, say, metals, but we don’t actually have mercury in the water, very well. And in European rivers there is such a problem, and they are actively fighting it. The Slovaks who did our screening were satisfied with the result. They said that in general your rivers are in a much better condition than everyone thinks about them,” the deputy minister said.
Khorev also said that there were traces of COVID pharmaceuticals in the water. Pills and injections used by Ukrainians are excreted from the body and sooner or later fall into the water.
He said that “the same thing is happening in Europe, there are good modernized cleansing facilities, but there are also old ones. Even the leading countries – Germany and France – have not reached good water state.”