SESSION OF EUROPEAN PARLIAMENT TO DISCUSS SITUATION AROUND UKRAINE 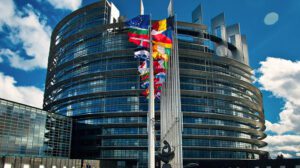 The humanitarian consequences of Russian aggression against Ukraine, as well as recommendations on spending on Ukraine in the EU budget, will be among the central topics of the plenary session of the European Parliament (EP), which will be held from April 4 to 7 in Strasbourg.
On Tuesday in Strasbourg, MEPs will discuss with the European Commission (EC) and the EU Council the possibilities of helping Ukrainian children fleeing military operations, in particular, protecting them from human trafficking and exploitation.
Following the launch on March 3 of a temporary protection mechanism for refugees from Ukraine, giving them the right to temporary EU residence, access to education and the labor market, the EC and the French Presidency of the Council of the EU are working on a 10-point plan that will “strengthen the common European response”. It will include the EU registration platform and the coordination of transport services for refugees, specific recommendations for the reception and support of children and adolescents from Ukraine. A corresponding resolution is expected to be adopted on Thursday.
According to UNICEF, almost half of Ukrainian refugees are minors who need enhanced protection as they are at greater risk of being trafficked and exploited.
The Ukrainian topic will also be in the parliamentary discussion on the priorities of the EU budget for 2023.
The MPs will call on the EU to “guarantee significant funding to address the geopolitical consequences of the current crisis, including support for humanitarian measures and ensuring preparedness for the reception of refugees in member states and in the countries of the Eastern Neighborhood.” On Tuesday, budget recommendations for 2023 will be put to a vote.
On Wednesday morning, the deputies will discuss the results of the March EU summit. The debate will be attended by European Council President Charles Michel and EC President Ursula von der Leyen, as well as High Representative for Foreign Affairs and Security Policy Josep Borrell.
At the March 24-25 summit, EU leaders had a wide-ranging discussion about the Russian war against Ukraine, international restrictions against Russia and the overall implications for the EU economy, with a focus on energy prices. US President Joe Biden attended the meeting in person, and Ukrainian President Volodymyr Zelensky remotely. A resolution will be adopted on the basis of the parliamentary debate on the results of the EU summit.
A separate debate on Tuesday evening will focus on the results of the EU-China Virtual Summit on Friday 1 April. It focused on the international consequences of Russian aggression in Ukraine and the position of China, as well as the future of bilateral relations between the EU and China, especially in the areas of trade and security.
On Tuesday, the session has time for questions and answers. The leaders of the European Council, the European Commission and the head of EU diplomacy will answer questions from European parliamentarians on a wide range of topics. Separately, the head of diplomacy Borrell will report. He will focus on the “Strategic Compass” – a project to strengthen the autonomy of the EU in the field of defense and security.
The agenda of the plenary session includes the traditional topics of the “green transition”, energy transformation, combating climate change, as well as human rights and the rule of law in Hungary and Poland and other issues.
On Wednesday, the EP will hold an urgent debate on human rights and on Thursday will adopt, respectively, three resolutions.