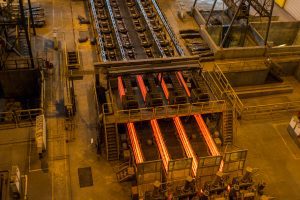 PJSC Interpipe Nyzhniodniprovsky Pipe Rolling Plant (Dnipro) has built and commissioned a new warehouse at the export site of the company’s wheel-rolling shop, investing $271,000 in the project.
According to the quarterly report of the company, at the beginning of 2020, Interpipe plant provided itself with an additional warehouse for finished products, and a collection point was established for packing additional volumes of wheels in pallets.
“The new storage was organized to reduce the cost of packaging for sending railway wheels for export,” it said.
In addition, the company began using wooden pallets instead of metal cassettes for products that are shipped to Europe by truck, transported by road.
The report also states that in March steel indices in the global markets declined due to a sharp drop in demand. At the same time, the cost of scrap metal HMS 80/20 CFR Turkey fell by $20.7/tonne, or 7.6% compared to the previous month, the cost of square billets FOB Black Sea by $18.1/tonne or 4.7%.
“Most of the traditional trade outlets for steel billets of CIS production were inactive due to blocking and restrictive measures introduced by the governments during the pandemic. The demand was seen mainly in China,” the report said.
The Ukrainian market has also suffered due to protective measures in the fight against coronavirus, in particular, the hryvnia has depreciated by 14.3% since the beginning of March, construction volumes were down. The output of railway wagons also decreased.