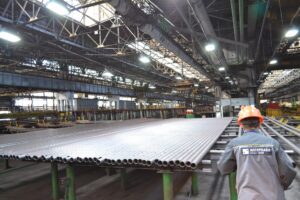 The Ukrainian industrial company Interpipe proceeds to expand its presence in the export markets, signing a three-year contract with Société Nationale Industrielle et Minière (SNIM) for supplying of 1,076 mm locomotive wheels according to the AAR standard.
The company said in a press release on Tuesday that SNIM is the only owner of 704 km railway infrastructure in Mauritania and is mainly operates large-scale freight transport.
The railway line connects the city of Zouérat, the center of country’s iron ore industry, with the port of Nouadhibou. The length of a single rolling stock consisting 200 wagons may be up to 2.5 km, so from two to four locomotives are usually used at the head of the railway train.
Director of Interpipe Railway Products Division Oleksndr Garkavij said that locomotive wheel is a technically complex product for North African countries. “Their wear resistance indicators have to be at a high level in sandy deserts. Moreover, Mauritanian trains are one of the longest and heaviest in the world. Our strategy is to continue increasing the share of export deliveries of railway products,” he said.
Interpipe is global producer of steel pipes and railway wheels, based in Ukraine. The company’s products are marketed in more than 80 countries all around the world via the network of sales offices located in key markets of Ukraine, Europe, North America and the Middle East. In 2020, Interpipe supplied 662,000 tonnes of finished goods, including 192,000 tonnes of railway products.
The ultimate owner of Interpipe Limited is Ukrainian businessman Victor Pinchuk and his family members.