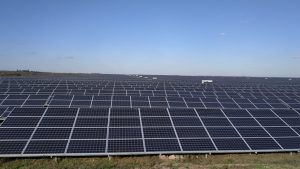 The issue with the disconnection of the solar power plant (SPP) of the Canadian investor TIU Canada in Nikopol located on the territory of the Nikopol Ferroalloy Plant (NFP) from the power grid lies in the plane of a business dispute, Executive Director of the Solar Energy Association of Ukraine Artem Semenyshyn has said.
“This issue lies on the plane of a business dispute. The two companies have agreed on the joint use of the substation. One is as a producer of electricity, the other is as a consumer,” he said at a press conference at Interfax-Ukraine on Friday.
At the same time, Semenyshyn said: “Indeed, it is very bad when we lose the already built “green” generation facilities, which are now idle and do not increase the share of clean electricity.”
In addition, he drew attention to the presence of several examples of how already built stations in Ukraine, due to problems with connecting to the power grids, cannot start work for a long time. “We urge the government to create a commission that would consider each case separately and contribute to the solution of the issue,” the director of the association said, stressing that this is a matter of the state’s image before both foreign and domestic investors.
“It will be very “interesting” if Ukraine starts reporting that it is reducing the share of “green” generation due to disconnections,” the head of the association said, expressing his concern.
As reported, TIU Canada, an investor in the field of solar energy, owned by Refraction Asset Management (Calgary, Canada), filed a lawsuit against the NFP due to the disconnection of its 10.5 MW SPP from the power grid in March 2020.