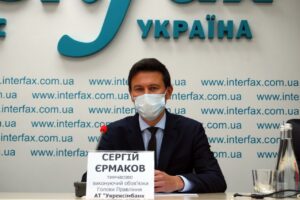 JSC Ukreximbank did not find any facts of terrorist financing when issuing a loan of $60 million to companies whose beneficiary is a citizen of Ukraine with the status of an internally displaced person, Serhiy Briukhovetsky, acting chairman of the bank’s board Serhiy Yermakov said. “At the time the loan was issued, the borrower, Mr. Briukhovetsky, went through the proper KYC verification procedure, within which the bank did not reveal information that would indicate the existence of criminal cases and proceedings in connection with the fact of holding shares in the company, including registered in uncontrolled territories,” he said at a press briefing at the Interfax-Ukraine agency.
For clarification, the bank received the client’s consent to disclose information that may constitute banking secrecy, Yermakov added.
According to the bank, as part of the check of the borrower, it was revealed that Briukhovetsky owns the corporate rights of three companies registered in the territory not controlled by Ukraine: Gorspetslift (50%, Horlivka), Dikon LLC (24%, Bakhmut), Spetsremmash LLC (16.6%, Horlivka). He also owned 45% of Eastern Donbas LLC (Horlivka), which ceased operations in 2011.
According to Yermakov, in April 2021 Ukeximbank provided a loan of $60 million to the companies Wholesale Network 2011 LLC and Slavian LLC, the beneficiary of which is Briukhovetsky. The loan was issued for the acquisition of corporate rights and the completion of the transaction for the purchase of the Sky Mall trade center in Kyiv. The total sum of the purchase is $80 million.
Thus, $39 million of the loan was used to refinance the Wholesale Network 2011 loan obligations in two Ukrainian and one European banks. Another $21 million was used to complete the acquisition of Sky Mall. In addition, Briukhovetsky contributed $20 million at the expense of his own funds and the funds of a related company – Sky Finance LLC.
“At the request of the bank, the borrower provided the conclusions of professional lawyers, including the British, registered with the Solicitors Regulation Authority, on the settlement of corporate conflicts and lawsuits … The availability of an arbitration award in the case of Estonian businessman Teder Hillar did not jeopardize the borrowers’ ownership of Sky Mall,” Yermakov said.
According to him, the entire complex of structures and the parking space of the Sky Mall shopping center are pledged on the loan. In addition, the bank received a guarantee from Briukhovetsky.