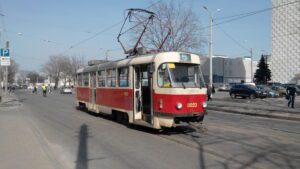 Stadler (Switzerland) has provided Kharkiv with a modern three-section tram for operational tests, the press service of Kharkiv City Council reports with reference to Dmytro Lipovoy, the director of municipal enterprise Trolleybus Depot No. 2.
“The car is equipped with all the necessary systems for the movement and comfortable transportation of passengers. But first, we must conduct operational tests, that is, to familiarize the technical staff with the design features of the car, to understand how these trams are suitable for our tram tracks, how we can serve this equipment from the point of view of the capabilities of our depots,” he said.
He did not rule out that, based on the results of the tests, the issue of purchasing such trams will be considered.
“In fact, this is the first step in our cooperation, and what it will result in – we’ll see. Perhaps the issue of purchasing such cars will be considered,” Lipovoy said.
As reported, earlier in July the secretary of Kharkiv City Council, Ihor Terekhov, announced the need to update the tram fleet within 3-4 years. 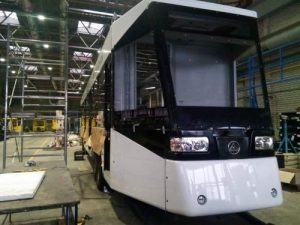 Etalon Corporation, one of the leading Ukrainian vehicle manufacturers, in 2021 introduces to the market a tram car of its own design TR 3100 based on the overhauled Czech tram Tatra T3, with the replacement of the bodywork with a new one on the basis of Tatra wheel bogies, Director General of Chernihiv Automobile Plant Andriy Savchenko said.
“The first sample has already been manufactured, it has advantages over competitors, it can be offered in several versions. Taking into account the fact that 14 Ukrainian cities have tram lines, and the depreciation of the rolling stock is more than 90%, we hope that the project will be successful. In early 2021 we will conduct final tests, and we are already negotiating the purchase with tram depots, ” Savchenko said at a press conference in Kyiv on Wednesday.
According to the information in the video presentation of the tram, released at the press conference, the model is offered in three versions, with the manufacture of a new bodywork with modern equipment and overhaul of bogies; with a new bodywork, equipment and purchase of new bogies; production of only the bodywork with varying degrees of equipment.
“Among tram depots, such a tram is relevant due to the depreciation of the fleet, its technological backwardness and high energy consumption, and the cost of a new tram is three times higher than that of an overhaul,” the presentation said.
The tram is almost 16 meters long, with a gross weight of 32 tonnes, and has a low floor area (in the middle of the cabin) with the possibility of wheelchair access. Traction drive is manufactured by the Informbusiness company (Moldova) with the ability to disconnect one of the bogies.
“Today Kyiv, Odesa, Zaporizhia and Vinnytsia are engaged in overhaul of trams in Ukraine. Dnipro purchases trams abroad and brings them here. And similar to our trams are made by the Polytechnoservice company, i.e. a new bodywork on overhauled bogies,” Savchenko said.
He did not disclose the price of the tram.
The corporation also presented a new fully low-floor trolleybus of a large class (12 meters) with an autonomous run of 20 km and dynamic recharging, with an asynchronous electric motor from a Latvian manufacturer (Riga Electric Machine Building Works), a traction drive and an autonomous running system of the Informbusiness company.
“Yes, we have abandoned traction motors produced by our Electrotyazhmash and switched to Riga ones, and as far as I know, our other manufacturers are also switching to them. They are much better [in quality] and the manufacturer provides a system of discounts,” Savchenko said.
At present, the design documentation has already been developed and the first sample has been manufactured.
Etalon Corporation unites 21 enterprises, including two automobile plants (in Boryspil and Chernihiv), as well as the Ukrainian Cardan plant, which produces cardan shafts, and Chernihiv Forging Plant. The main activity is bus and machine building, warehouse logistics.