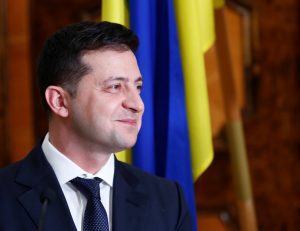 This recommendation is contained in the “Biden and Ukraine” strategy developed for the administration of new U.S. President Joe Biden, which was released on Friday.

“The first order of business should be to establish straightforward relationship, a relationship of trust between Biden and Zelensky after efforts by Trump to leverage the United States’ relationship with Ukraine for his own political benefit. Despite Trump’s actions and the subsequent impeachment process, the United States continued to provide bipartisan support for Ukraine, which testifies to its important interests there and the wisdom of congressional leaders. Still, this experience has left the Zelensky team with real concerns about its relationship with Washington and its image among the U.S. public,” the experts said in the document.

The authors believe that a return to normal the U.S.-Ukrainian relations “will inevitably take time” as the new administrative staff its senior foreign policy ranks.

According to the recommendations, U.S. Secretary of State Antony Blinken has already called Foreign Minister of Ukraine Dmytro Kuleba and “it is important that Biden, U.S. Vice President Kamala Harris and U.S. National Security Advisor Jake Sullivan be in touch soon with their Ukrainian counterparts to underscore the administration’s commitment to cooperate closely with Ukraine.”

“The big objectives of the U.S. policy have been the same since 2014: to help Ukraine defend its territorial integrity and sovereignty in the face of Kremlin aggression, and to help Ukraine undertake the reforms needed to become a nation of laws with a growing and prosperous economy. The Biden team is uniquely qualified to pursue these objectives successfully,” the analysts said.

In addition, they said that vice president, Biden was a hands-on policy maker for Ukraine.

“Now, as president, he will not have the time for that, but he should reach out to Zelensky, first by phone Ukraine’s President Volodymyr Zelensky, German Chancellor Angela Merkel, French President Emmanuel Macron and Russia’s President Vladimir Putin attend a joint news conference after a Normandy-format summit in Paris, France, December 9, 2019. Establishing a president-to-president understanding will facilitate policy dealings at lower levels and increase US clout in Kyiv, which will prove important as it works with Ukraine on difficult reform issues,” according to the recommendations.

In their opinion, it is necessary to appoint an ambassador to Ukraine as soon as possible and work with Congress to increase military assistance to Kyiv in the amount of up to $500 million per year.

“Appoint an ambassador as soon as possible. Quickly name a strong candidate who has Biden and Blinken’s trust as the new U.S. ambassador to Ukraine and work for their quick Senate confirmation and dispatch to Ukraine,” the experts said in the document.

“Name a special envoy or empower a senior subcabinet official to either join the Normandy Format or to consult frequently with the four players,” the authors said.