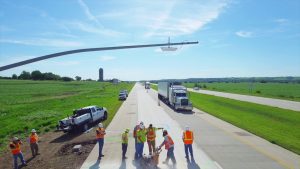 The Cabinet of Ministers of Ukraine has supported amendments to the Government Program for Improving Road Safety in Ukraine for the period until 2020, thanks to which 25 Weigh-in-Motion (WiM) scale systems will be installed and 50 portable truck weighing scales will be upgraded. According to the press service of the Infrastructure Ministry of Ukraine with reference to Minister Vladyslav Krykliy, the Cabinet of Ministers adopted the corresponding decision on Wednesday.
“Due to violation of the rules for the passage of oversized and heavy vehicles, roads are being destroyed. The government is spending on their repairs and the number of accidents on these roads is increasing. Today, out of the 78 portable truck weighing scales purchased in 2017, 50 require replacement of weighing elements. I am glad that the government supported the changes to the government program for improving road safety. Now, for effective overall weight control, 50 portable truck weighing scales will be updated, and 25 WiM complexes will be installed,” the press service said, citing the minister.
Accordingly, with the changes, the cost of installing modern WiM systems was increased by UAH 380.7 million, and the cost of the purchase of 50 portable truck weighing scales was increased by UAH 15 million.
In addition, it is envisaged to increase the number of tablets for employees of the National Police by 200 units (up to 1,200), to purchase 30 mobile diagnostic stations for checking the technical condition of vehicles and 30 road laboratories for checking the condition of the road network. It is also planned to purchase another 10 rescue vehicles for the State Emergency Service in order to reduce the time of arrival of the service to the accident site to 7-10 minutes.