WINDROSE TO START NEW FLIGHT PROGRAM IN UKRAINE FROM JUNE 15 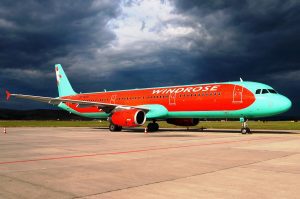 Windrose has announced the start of the new flight program inside Ukraine from June 15, 2020. According to a posting on Windrose’s official Facebook page, the airline plans to connect the east, west, north and south of Ukraine with a flexible flight schedule, starting flights between Kyiv, Lviv, Odesa, Kharkiv and Dnipro.
Windrose said that thanks to the new flight schedule for Ukraine, passengers will have the opportunity to choose between morning, afternoon and evening departures and visit two or three cities a day.
“In particular, one can get from Lviv to Kharkiv and return back within one day. This is a new opportunity to quickly move within the country several times a day,” the airline said.
So, Windrose plans to fly from the Boryspil international airport (Kyiv) to Dnipro, Odesa, Lviv and Kharkiv performing three flights per day. At the same time, direct flights between regions, for example Kharkiv-Lviv, are planned to be performed once or twice a week.
From July 15, the airline intends to additionally open daily flights from Kyiv to Mykolaiv using ATR72-600 and Еmbraer Е145 aircraft.