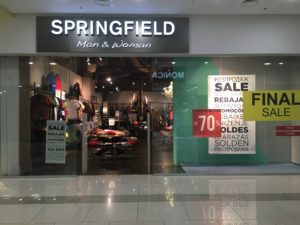 Estonia’s KarKat Fashion, the exclusive representative of Spain’s Tendam Global Fashion Retail in Ukraine, plans to open three new Women’secret and Springfield stores in 2019, two of which will be located in the River Mall shopping and entertainment center.
The press service of the retailer reported that the chain of the group of the Spanish brands in Ukraine would expand to 19 stores.
“The Springfield brand is actively developing and today it has seven stores located in the main shopping centers of Kyiv and Lviv. The store at the River Mall will be the eighth in Ukraine. Its space will be organized in such a way as to create more free space for customers to move. The store will be decorated in industrial style with the emphasis that Springfield is clothing for city life,” the company told Interfax-Ukraine.
According to the company, the area of the store in the River Mall shopping center will be 133 square meters.
In addition, KarKat Fashion plans to open a 93-square meter Women’secret shop in the mall.
“This store will be implemented in the bogetic concept (from the words boheme and poetique). In Ukraine, the stores of the network are represented in three cities – Kyiv, Lviv and Dnipro. Today the brand has nine stores. In the near future, two more stores will be opened, including in the River Mall shopping center,” KarKat Fashion said.
According to the company, both stores will be located on the first floor of the boutique gallery, next to the large department stores of the Spanish group Inditex. Their opening is scheduled on the day of the official launch of the River Mall shopping center, the construction of which is at the final stage.