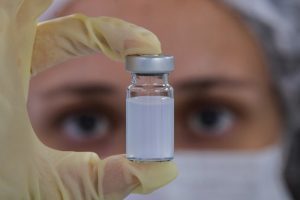 The pharmaceutical group of companies Yuria-Pharm is considering the possibility of localizing vaccine production in Ukraine.
Director General of Yuria-Pharm pharmaceutical corporation Dmytro Derkach told Interfax-Ukraine that the company is actively working on the issue of providing the Ukrainian population with vaccines, including the vaccine against COVID-19.
“Five years ago, construction began on a new plant in Cherkasy with a total area of more than 25,000 square meters, which provides for high-tech aseptic production and production of biotechnological products. The workshops of the new production site have been launched starting in 2020,” he said.
According to Derkach, the construction of the new facility became possible “thanks to the principle that the company has adhered to since its inception: to reinvest over 80% of profits in new directions, which is more than $25 million per year, and also thanks to a loan from the European Bank for Reconstruction and Development (EBRD ) obtained in 2020.
He said that a prerequisite for the development of the production of biotechnological products was the developments of its own Biotech R&D, in particular, a technological platform for the development and pilot production of recombinant protein products, monoclonal antibodies. In addition, a hardware and methodological base was established to ensure quality control of biopharmaceuticals and vaccines, both of our own production and solutions of contract partners.
Yuria-Pharm is also testing its own platform for the development of RNA-based drugs as an effective, modern, safe and fast drug development method, which, in particular, has been used by companies that have become pioneers in the development of an RNA vaccine against COVID-19.
“We are now actively working on the issue of finding partners for the transfer of technology for the production of vaccines from COVID-19 to our new production site. We have selected a pool of companies for this, including from the United States and China, whose development is in the late stages, in particular in the third phase of clinical trials. We are negotiating with them to select a potential candidate for technology transfer and provide them with our production facilities,” Derkach said.
The director general of the group clarified: “We are not developing our own vaccine, since at present there are more than 130 companies in the world at various stages of developing a vaccine against COVID-19, so we are looking for a candidate among them.”
But at the same time, he believes that the pharmaceutical industry of Ukraine should be potentially ready for the transfer and industrial production of vaccines, the development of which will eventually be offered by domestic research institutes.
The group of companies Yuria-Pharm is included in the list of the largest pharmaceutical companies in Ukraine. The main areas of activity are the development (R&D,) production, marketing and distribution of drugs and medical products.
Yuria-Pharm LLC is a member of the Association of Manufacturers of Medications of Ukraine (AMMU).