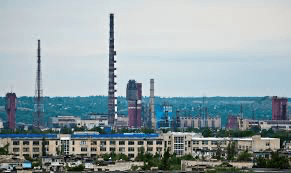 PrJSC Severodonetsk Azot has resumed production of liquid carbon dioxide, and its production capacities will allow shipping about 1,500 tonnes of marketable products per month, Group DF said in a press release.
The decision to expand the range of manufactured products due to liquid carbon dioxide, which is not part of the main product line, was made in order to increase the margin of the business.
Production of liquid carbon dioxide became possible after the restoration of the full production cycle at the enterprise and the start of ammonia production, the report said.
PrJSC Severodonetsk Azot is one of the largest Ukrainian chemical enterprises. It has been part of Group DF since 2011. Its core business is production of mineral nitrogen fertilizers.
According to the statements of the enterprise, in 2019 the company received UAH 6.091 billion of net profit against UAH 162.211 million of net loss in 2018. The company’s revenue increased by 2.3 times, to UAH 1.066 billion.