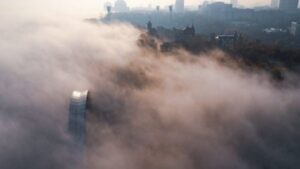 Data from all of the capital’s air quality monitoring points have been included in the “Kyiv Digital” application, said Kyiv Mayor Vitali Klitschko.
“I will note that Kyiv continues to strengthen control over the state of atmospheric air. After all, military actions and shelling caused fires in the suburbs, from which the air condition on some days was unsatisfactory,” Klitschko stressed.
According to him, five stationary complexes of European standard are already working in the capital, carefully examining the quality of the air on about 10 indicators. It is also planned to add to them the measurement of the radiation background.
Kyiv plans to install three more stationary points of observation in Desniansky, Holosiyivsky and Sviatoshynsky districts in 2022.
There are also more than 40 indicative air monitoring stations in the capital, supplementing the data from the main stations.