HEALTH MINISTRY OF UKRAINE WARNS ABOUT ANOTHER TYPE OF CORONAVIRUS DISEASE 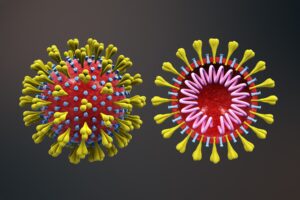 The Center for Public Health under the Ministry of Health of Ukraine warns Ukrainians about another type of coronavirus disease MERS-COV, which is spreading in the countries of the Middle East.
“Ukrainians who plan to travel to the Middle East should take into account the circulation of Respiratory Syndrome (MERS-CoV) in the Middle East region. The virus was first diagnosed in Saudi Arabia back in 2012. However, new human cases of MERS-CoV are still being reported, including lethal ones,” the message says.
As noted, Middle East respiratory syndrome (MERS-CoV) is an acute respiratory viral infection caused by the MERS-CoV coronavirus, which is pathogenic for humans.
In particular, the course of the disease may be asymptomatic, and may be accompanied by severe clinical manifestations such as high body temperature, cough and shortness of breath. Often, patients are diagnosed with pneumonia.
According to the World Health Organization (WHO), the infectious agent is limited to the Arabian Peninsula. In particular, most cases were reported in Saudi Arabia, Oman, Qatar, Iran, Jordan, Kuwait, Yemen, and the United Arab Emirates. Outside the region, isolated imported cases of the disease were recorded. However, travelers are advised to be vigilant and take into account the likelihood of infection in the listed countries.
“During the period from January 1 to March 11, 2021, Saudi Arabia reported to WHO about seven new cases of MERS-CoV infection, including three deaths. The patients’ age is from 48 to 84 years. Three of them had contact with camels. All infected had concomitant diseases: diabetes mellitus, hypertension or chronic kidney disease. This fact underlines the previously existing evidence that people with just such diseases, as well as lung diseases and weak immunity, become the main target for MERS-CoV,” the Center said.
It is also noted that MERS-CoV infection occurs through direct or indirect contact with camels. The virus is transmitted from person to person within the family.
Travelers are warned before visiting the Middle East to avoid close contact with animals, especially camels, consuming raw camel milk or eating meat that has not been properly processed, to refrain from visiting crowded places, to follow general rules of hygiene such as regular washing hands before and after touching animals and avoiding contact with sick animals, and follow food hygiene practices.