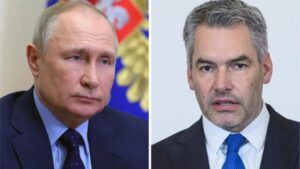 Austrian Chancellor Karl Nehammer delivered a message to Russian President Vladimir Putin that “this war must stop,” writes the Kronen Zeitung newspaper on Monday, citing Nehammer’s office.
Nehammer himself described the meeting as “very tough”, “very open”, “very direct” – “not a friendly visit”. For him, it was an “obligation”. He wanted to “leave no stone unturned” in order to achieve a cessation of hostilities, or at least humanitarian progress for the suffering civilian population of Ukraine, the newspaper writes. At the same time, she quotes the message of the office, “there is no alternative to the search for a direct dialogue with Russia, despite all the differences.”
Alleged Russian war crimes were also dealt with “in the clearest possible way,” the report said. In addition, the chancellor made it clear that sanctions against Russia will continue and in any case will be tightened as long as people die in Ukraine. “I touched on serious war crimes and stressed that the perpetrators must be held accountable. I also told President Putin in no uncertain terms that as long as people are dying in Ukraine, sanctions against Russia will remain in place and will continue to get tougher,” he said.
The EU is more united than ever on the issue of sanctions, he said. Nehammer will now brief Austria’s European partners on the talks and make recommendations on the next steps. “But my most important message to Putin was that this war must finally end, because in a war there are only losers on both sides,” the newspaper quoted the chancellor as saying.
On Saturday, the Austrian chancellor visited Kyiv and met with Ukrainian President Volodymyr Zelensky.

Austrian Chancellor Karl Nehammer arrived in Kyiv on Saturday, President of Ukraine Volodymyr Zelensky said.
“Austria supports us in resisting the aggression of the Russian Federation. The visit of Federal Chancellor Karl Nehammer to Kiev is an important manifestation of solidarity with the Ukrainian people,” the president said in a Telegram channel.
Zelensky stressed that it is an important signal for us that Austria supports Ukraine and thanked for the help.
“And I think today we will talk in detail about this or that support. I would like to thank the people of your country separately, we saw how they took to the streets, on the squares, supported us in the struggle for our independence,” Zelensky said during the meeting .
In turn, the Austrian Chancellor noted that he expresses respect to the President, government and people of Ukraine.
“It is quite clear that we, Austria, are on your side and are trying to help wherever, whenever and wherever we can. And we will expand our assistance,” Nehammer stressed.