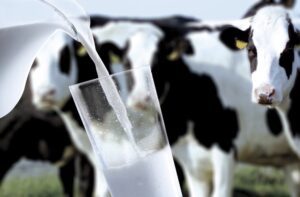 A number of enterprises representing the dairy industry are preparing a statement for consideration by the Interdepartmental Commission on International Trade to ban the import of dairy products from Belarus to Ukraine, since the embargo it introduced in 2016 on Ukrainian dairy products is a discriminatory and unfriendly action.
This was announced by Head of the Union of Dairy Enterprises of Ukraine Vadym Chaharovsky to Interfax-Ukraine on Tuesday.
“We believe that in this case it is necessary to apply Article 29 of the law on foreign economic activity on protection from unfriendly actions of states or economic groups. We believe that the Republic of Belarus took such discriminatory unfriendly actions against Ukraine,” he said.
Chaharovsky said that in 2015, Belarus supported the Russian embargo on the import of Ukrainian dairy products, which came into effect on January 1, 2016. At the same time, the Ukrainian market is currently open for the products of 14 milk processing enterprises from Belarus.
According to Article 29 of the law on foreign economic activity, in response to discriminatory and/or unfriendly actions of other states, customs unions or economic groups, Ukraine may apply a full or partial ban on trade; deprivation of most favored nation or preferential special treatment; introduction of special duties; introduction of a licensing regime for foreign economic operations; establishment of quotas.
The head of the union said that the Ministry of Economy refused to conduct a special investigation of the growing imports of dairy products to Ukraine, an application for which was submitted in February 2021 by a group of 14 enterprises representing the dairy industry. He said that the enterprises are going to submit a repeated application within the next 10 days.