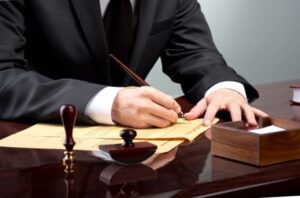 The Cabinet of Ministers of Ukraine has approved the powers of notaries in certifying real estate transactions during martial law, the press service of the Ministry of Justice reported.
According to the relevant resolution of the Cabinet of Ministers, notarial certification of contracts on real estate transactions is allowed only to those notaries who were included in the relevant list of persons who are allowed to carry out notarial acts in relation to valuable property during martial law.
In addition, such actions are prohibited for notaries whose workplace is located in territories where access to unified and state registers has been terminated, in particular, in the temporarily occupied territories of Ukraine.
It is also prohibited to sell real estate within one month from the date of state registration of ownership, as well as real estate transactions by proxy.
Certification of contracts for the sale of real estate, mortgages, trusts is allowed only at the location of the property. At the same time, in Kyiv and the Kyiv region, notarial actions with real estate are allowed only for local notaries, if the property or legal entity is located in this territory, or at the registered place of residence of an individual – one of the parties to the agreement.
Such conditions will be in effect during martial law for one month after, the Ministry of Justice notes.