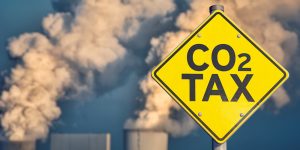 The Cabinet of Ministers of Ukraine on Wednesday decided to create a working group for consultations with the European Commission on aligning an approach on the introduction in Ukraine carbon tax – the carbon border adjustment mechanism (CBAM), permanent representative of the Cabinet of Ministers in the Verkhovna Rada Vasyl Mokan said.
“The European Commission is expected to submit a relevant legislative proposal to the European Parliament and the European Council by mid-2021. That is why there was a need for a unified approach of the Ukrainian side for communication and interaction with the European Commission on the issue of introducing CBAM in Ukraine,” Mokan wrote on his Telegram channel.
According to the explanatory note to the document, within the framework of the working group it is planned to develop a consolidated position of the Ukrainian side. The working group was chaired by Deputy Prime Minister for European and Euro-Atlantic Integration Olha Stefanishyna and Deputy Minister of Economy, Trade Representative of Ukraine Taras Kachka became her deputy.
As reported, the official documents of the European Commission and the European Parliament suggest that an individual approach will be applied to the third countries with which the EU has an Association Agreement or a free trade area when introducing CBAM.
CBAM envisages the introduction of an environmental duty for the import of products into the EU, depending on the amount of carbon dioxide emissions during the production process. Presumably, the mechanism will be launched on January 1, 2023 as part of the implementation of the Green Deal strategy.