FOUNDER OF UFUTURE REFUTES INFORMATION ABOUT INVESTMENT ACTIVITY IN CRIMEA 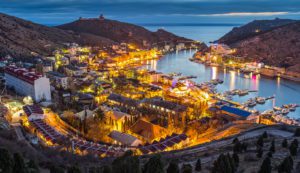 The founder of UFuture, Vasyl Khmelnytsky, refutes his involvement in managing and investing in Crimean assets after the annexation of the peninsula, the group said in a statement. “We refute information about the alleged involvement of Vasyl Khmelnytsky in managing and investing in Crimean assets after the annexation of the peninsula by Russia … After Russia had annexed the Crimean peninsula in 2014, Vasyl Khmelnytsky did not invest in the development of business and/or infrastructure in the temporarily occupied territory, and did not manage the assets, which partially belonged to him at that time,” the company said.
Commenting on a publication entitled “Simferopol’s developer, IT leader in Kyiv. Ukrainian businessman Vasyl Khmelnytsky and his assets in Crimea” by the Current Time edition and the Municipal Scanner project, UFuture emphasized that the information in the article was untrue.
“We were not ready to simply give our liquid assets to third parties. The negotiation and sale process took a considerable time due to understandable risks. In 2018, we sold all the corporate rights of our European companies, which, in turn, owned corporate rights or provided significant impact on the assets located in the temporarily occupied territory of Ukraine, in Crimea. We did not make any investments that would violate the sanctions regime or the current legislation of Ukraine,” Khmelnytsky said.
The businessman added that the facilities in question are very large in terms of investment, and their sale was associated with significant risks.
“It is not easy to find buyers for such facilities, and the sale process itself took a long time. But the decision to sell the assets was made immediately after the annexation of Crimea,” he said.
UFuture is a holding company of Ukrainian businessman Vasyl Khmelnytsky, which combines his business and social projects. It has a diversified portfolio of assets in real estate, infrastructure, industry, renewable energy, pharmaceuticals, and IT. The value of UFuture’s assets is estimated at $550 million. The total capitalization of the businesses in which it invested exceeds $1 billion.