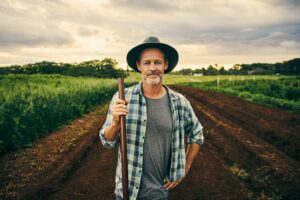 Since the launch of the land market on July 1 and as of the morning of August 16 in Ukraine, a total of 7,100 transactions of agricultural land purchase for agricultural plots with a total area of ​​14,830 hectares were held, Poltava and Kharkiv regions are leaders in the number of concluded agreements, the Ministry of Agrarian Policy and Food reported on the website on Friday, August 13.
It is reported that Poltava region is in the lead in terms of the total area of ​​sold land plots with an indicator of 1,740 hectares, followed by Kharkiv (1,710 hectares), Dnipropetrovsk (1,230 hectares), Kirovohrad (1,210 hectares) and Kherson (1,100 hectares) regions.
The Ministry of Agrarian Policy also said that during this period, 5,240 applications for access to the State Land Cadastre for the purpose of online verification of land plots purchase legality were received from notaries. Among them 4,590 applications were agreed, 49 applications are in the queue for consideration, 0,600 applications denied access. In total, there are more than 6,000 notaries in the country.
As reported, the agricultural land market launched in Ukraine as part of the government’s land reform began operating on July 1. At the first stage of the reform, only citizens of the country will be able to buy and sell land plots. One individual will be able to dispose of no more than 100 hectares.
The right to purchase agricultural land on January 1, 2024 will be given to legal entities established in accordance with the legislation of Ukraine, while the final beneficiary of one or more legal entities will be able to consolidate through them a total of not more than 10,000 hectares.