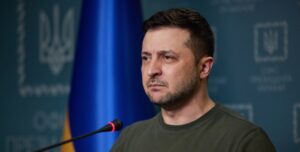 Ukraine needs a strategic plan for international support, it will be a modern analogue of the historic Marshall Plan, President Volodymyr Zelenskyy said while speaking via video link at the High-Level International Donor Conference on Ukraine in Warsaw on Thursday.
“The restoration of Ukraine must now become as historical an example for our time and future as the restoration of European countries after World War II… It will be an investment in the stability of all of Central and Eastern Europe. So that the aggressor knows that he will not break the power of Europe and freer nations that everything that was destroyed by the war will be restored,” Zelensky stressed.
He noted that freedom must demonstrate that it protects and provides people better than tyranny, which for decades has enjoyed a huge flow of money, the sale of oil, gas and other raw materials, which is why this conference is so important for everyone in Europe both strategically and in tactical terms.
Zelensky pointed out that Ukraine now retains full functionality, but needs sufficient financial resources “so that Ukrainian men and women are provided with everything necessary,” and in continuous work, the state, as the manager of these funds, will cover priority defense, social and humanitarian needs.
The President added that a large-scale recovery and reconstruction plan is already being prepared.
If this new Marshall Plan for Ukraine provides for quick and sufficient steps, he said, it will mean that millions of Ukrainians who have been displaced by the war will be able to return home.
“How this brutal war will end is decided not only on the battlefield, but also in matters of economy and finance, and humanitarian support, and in the ability to ensure a normal life in the liberated territories and restore what was destroyed by the Russian army,” Zelensky summed up. .
He added that Ukraine invites its partners – civilized and responsible countries – to take over the patronage of those regions, cities and industries of Ukraine that suffered from the war unleashed by Russia, in order to jointly ensure their full restoration.
“I believe that today Europe will show its strength, you will show your strength, including the strength of international institutions, the UN institutions, whose representatives are now with us … because this is for common freedom,” Zelensky concluded his speech.