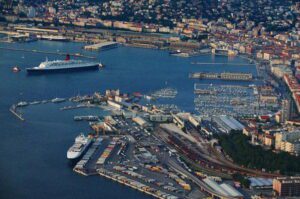 The German Hamburger Hafen und Logistik AG (HHLA), which operates the Container Terminal Odesa (CTO) and two intermodal logistics companies in Ukraine, is organizing the Odesa-Trieste container route, Managing Director of HHLA International GmbH Philip Joseph Sweens has said.
“Now we are creating a chain linking Odesa and Trieste… and trying to manage as many trains as possible,” he said at a discussion organized by the European Business Association last week about doing business in the conditions of war in Ukraine.
At the same time, Sweens said that Ukraine is already facing a shortage of railway platforms and the reluctance of shipping lines to send containers back to Ukraine.
“So for now it’s a bit of a one-way route,” the managing director said.
Commenting on the situation at the terminal, he said that it was shut down at a request of the authorities at the beginning of the war and only a limited set of operations for the delivery and reception of containers is carried out, as Russia continues to impede any movement of ships in the Black Sea.
According to Sweens, the terminal was not damaged. More than 270 employees and their families were evacuated to Hamburg and Constanta. The director said that the staff did and is doing everything possible to maintain the efficiency of Ukrainian companies, and continues to receive salaries.
He added that all existing equipment is being maintained, so everything is in working order, and the terminal will be ready to quickly resume operation if the opportunity arises.
“It is clear that we remain very committed to Ukraine and will do our best to continue working in the long term,” Sweens said.
According to him, under the current conditions, the company is asking the authorities to impose a moratorium on rental payments, as they are quite high for the terminal, which now has a very small volume of activity.