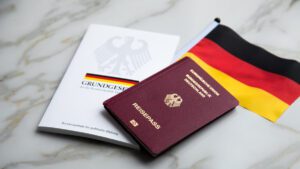 Tens of thousands of migrants will be able to legally stay in Germany after the country passed a law that makes it easier for them to obtain documents for permanent residence, the Associated Press (AP) reported on Wednesday.
“We want people who have already settled here to have good opportunities,” German Interior Minister Nancy Feather was quoted as saying by the AP.
“Also through this law, we will put an end to bureaucracy and uncertainty for people who have become part of society,” she added.
The new measure will affect around 136,000 people who have lived in Germany for at least five years.
At the same time, these people must have a decent salary, speak German and prove that they have integrated well into society.
Those who meet the necessary requirements can first apply for a residence status in Germany for a period of one year, and then for a permanent residence permit in the country.
People under 27 can apply for permanent residence after they have lived in the country for at least three years.
Information technology specialists, as well as some other specialists that Germany needs, will have the opportunity to move with their families, which was not possible before. In addition, the law will make it easier to enroll in German language courses for refugees, as well as facilitate the deportation of criminals.