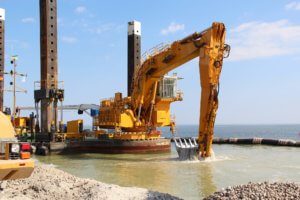 The Ukrainian Sea Port Authority has announced an open tender to select a contractor to conduct dredging works in the internal water area of Odesa Maritime Merchandise Port, the authority has said in a report. It is planned that dredging will be conducted in 2018-2019. Over 91,000 cubic meters of soil is to be removed. The expect cost of works is UAH 19.03 million. “We conducted dredging works at Odesa seaport last year using own fleet, and this year we will attract a contractor, as the authority’s fleet is used at other sections, in particular, works in Danube and Azov regions,” Ukrainian Sea Port Authority Head Ravis Veckagans said.
Bids can be submitted both by Ukrainian and international companies before June 4, 2018. 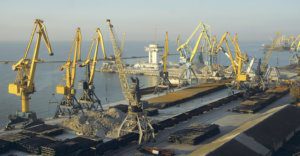 Mariupol seaport (Donetsk region) in January-March 2018 increased cargo handling by 10.5%, year-over-year, to 1.333 million tonnes.
In the first three months of 2018, the port increased transshipment of exported cargo by 5.8%, to 1.26 million tonnes, imported freight by 4.3 times, to 56,000 tonnes, cabotage cargo by 6.5 times, to 16,300 tonnes, the Ukrainian Sea Ports Authority said.
Yet, the port did not handle transit goods.
According to the types of cargo, the port did not handle liquid cargo, while dry bulk handling rose by 1.2%, to 239,000 tonnes, that of non-bulk goods increased by 17.8%, to 1.094 million tonnes.
Mariupol seaport is one of the largest ports of Ukraine. Its capacity allows handling more than 17 million tonnes of cargo per year. The port is open all year round for ships with a length of up to 240 meters and a draft of up to 8 meters. Its territory is 73.2 hectares, the length of the berthing line is 4.2 km.