Sales of trailer vehicles in Ukraine grows by 2.3 times in July 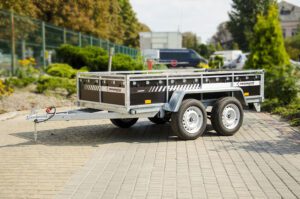 Sales of trailer vehicles in Ukraine (new and used) in July 2022 grew by almost 2.3 times compared to the same month in 2021, AUTO-Consulting has reported.
“In July, record sales volumes were seen on the trailer market, including a significant share of new semi-trailers,” the group said on its website.
At the same time, sales of new trailers grew by 42%, and sales of used ones grew by almost 2.6 times.
As Auto-Consulting director Oleh Omelnytsky told Interfax-Ukraine, in the total number of trailers sold, new semi-trailers amounted to 369 units, trailers were 8 units.
According to the group’s analysts, such a high demand was provided by agricultural and oil companies, as well as international haulers.
The largest sales in July were provided by dump trucks-grain carriers, in second place were fuel tank carriers.
“For the first time in a month, more than 100 tanks from different manufacturers entered Ukraine,” the company said.
Increased demand was also noted for curtain side semi-trailers, refrigerators and trawls.
The German Schmitz-Cargobull became the market leader with a 21% share and a 2.4-fold increase in sales. Polish manufacturers were also active.
Turkish manufacturer Ali Riza Usta was in the lead in the segment of fuel trucks, slightly ahead of the Ukrainian Everlast. The trailed equipment of the Ukrainian plant VARZ was also in demand.