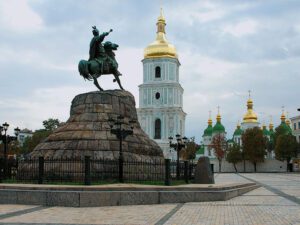 Head of the State Agency for Tourism Development Maryana Oleskiv believes that tourist facilities of state importance should be transferred to local communities and state subventions should be allocated for their development. “The most important thing is that today every community leader, developing a strategy for a long-term period of seven years, understands the significance of a historical monument, understands the importance of any objects located on their territory, that this is primarily an opportunity for their development,” Director General of the Regional Policy Directorate at the Ministry for Communities and Territories Development Viktor Podorozhniy said at a press briefing on Tuesday in Kyiv.
According to him, communities do not need large investments for such a process, at the same time, coordination of local authorities, business and central authorities is needed.
“When we talk about territorial communities, then, indeed, some objects are state-owned with different subordination, there are municipal facilities, and there are also state-owned, but regional ones,” Oleskiv said.
According to her, this leads to a number of problems, as all these objects are part of the tourist route, and there is no interest for a tourist to come there and these objects to earn money.
“Therefore, the issue of decentralization and development of communities, if we are talking about such objects that have state subordination, must still be transferred to communities, if they are not strategic state objects, and we should think about some subventions for their development,” Oleskiv said.
According to her, it is necessary in each individual case to stimulate development and attract tourists, without harming such objects.

In November 2020, Donbasenergo PJSC transferred UAH 113.1 million of taxes and other mandatory payments to the state and local budgets, which is 3.2% (UAH 3.7 million) less than in November 2019.
According to the company’s press release, UAH 103.2 million of payments were transferred to the state and local budgets. Donbasenergo also paid UAH 9.9 million of excise tax, which is 3.2% from each UAH 1/kWh of electricity generated.
Electricity generation by the Slovianska TPP in November amounted to 327.948 kWh, in January-November – 2.9 million kWh, and supply – 296.282 kWh and 2.5 million kWh, respectively.