BORIS JOHNSON: UKRAINIAN ISSUE WILL BE ONE OF MAIN DURING MEETING OF G7 HEADS 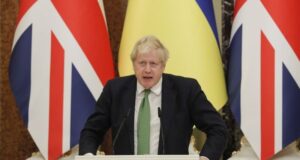 Prime Minister of the United Kingdom of Great Britain and Northern Ireland Boris Johnson, after the meeting of the countries of the British Commonwealth, expressed confidence that the Ukrainian issue will be one of the main issues at the next meeting of the G7 representatives.
“It has been a fantastic few days in Kigali. We are working together with our Commonwealth friends to stimulate trade and investment, advance the green industrial revolution and find solutions to the crisis in Ukraine that will be the focus of the G7 in the coming days,” he wrote in Twitter Saturday night.
As reported, on June 24, Johnson said that the countries of the British Commonwealth together will be able to achieve a reduction in world food prices.
“Global prosperity and stability are under threat – Commonwealth countries bear the brunt of Putin’s recklessness in Ukraine. Together we can bring down food prices and get the world economy back on track while standing up for the freedoms we all believe in,” he wrote.