COST OF UKRAINIAN LAND AFTER LAUNCH OF MARKET WILL BE $2,200/HA 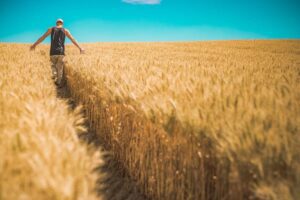 Experts estimate the average cost of 1 hectare of agricultural land after the opening of the land market on July 1 at $2,200, by the end of the year its cost will reach $2,500/ha, co-founder of the Land Club association of land investors Oleksandr Kolotilin has told Interfax-Ukraine.
“The start of the market is on average planned at the level of $2,200 per ha. But at the same time, it must be clearly understood that the agricultural land market existed before July 1, 2021. Still, 5 million hectares of land allocated within the framework of free privatization for private farming for all the years of Ukraine’s independence is also a sufficient amount of land. Thus, the price of land that was under the moratorium correlates with the market that has existed all this time,” Kolotilin, who in 2017-2019 was the acting head of the State Service of Ukraine for Geodesy, Cartography and Cadastre, said.
He clarified that the opening of the land market will be beneficial primarily to its sellers, since at the first stage of the land reform implementation there will be no more than 10% of the total number of interested parties who want to sell their shares.
“Since there are many more people who want to buy or invest in agricultural land today than offers, this will gradually push the price up. I do not think that by January 1, 2022 the situation will change dramatically, but it is definitely worth expecting an increase in prices. On average, the price will reach the level of $2,500/ha,” the expert noted.
According to him, in different regions and even different districts of the same region, the cost of land differs quite strongly.
“If, for example, in the north and center of Ukraine land prices are high and growing, in the south, in the zone of risky agriculture, in the zone of difficult access to moisture, where there is the need for serious investments in land reclamation, they are lower. Today the average price in central Ukraine is $2,000-2,500, in the north – $1,700-2,200, and in Kherson region I’m not sure that someone will pay more than $1,000 per hectare without access to moisture,” he noted.
The expert said that he does not expect a rush to buy land in specific regions. According to him, the greatest demand for agricultural land will remain in the central, northern and western parts of Ukraine.