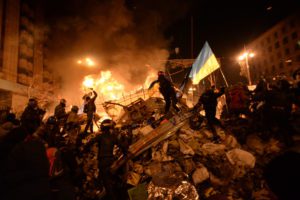 Between October 14, 2018 and October 14, 2019, representatives of nationalist and ultra-right organizations committed 137 acts of violence or attacks against property, journalists, politicians, and activists, said sociologist Oksana Dutchak, who helped with the monitoring project, named “Confrontations and Ultra-Right Violence.” sociologist. “From October 14, 2018 to October 14, 2019, 137 cases were recorded. Of these, 48 is a confrontation, 89 is ultra-right-wing violence directed against people or property,” she said during a press conference at the Interfax-Ukraine news agency on Monday.
The monitoring was carried out by the public organization Institute Republiсa with the support of the Rosa Luxemburg Foundation in Ukraine. It was based on materials on acts of violence or confrontation by ultra-right organizations and movements, information about which was published in the media and social networks.
“Over the indicated period, the largest number of acts of violence and confrontation were committed by representatives of the C14 and National Corps organizations. With the participation of C14, 40 cases were recorded, among which 25 violent attacks, 10 of them against people. The National Corps was involved in 30 episodes, 21 – of a violent nature, 15 of them against people,” said the organizer of the monitoring.
According to the monitoring results, the victims of violent actions by nationalists were most often feminist or LGBT activists, politicians and political parties, representatives of state or law enforcement agencies, as well as journalists.
Authors of the study said they think that Ukraine has a systemic problem with far-right violence, which is generated by inaction, and sometimes indulgence of the law enforcement system. They demand law-enforcement agencies conduct a thorough investigation of hate violence, as well as guarantee the rights of citizens to peaceful assembly, freedom of speech and security.