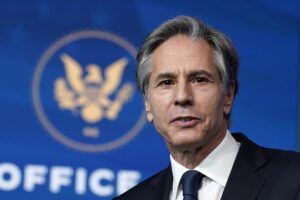 U.S. Secretary of State Antony Blinken will arrive in Kyiv for a two-day visit on May 5, Department Spokesperson Ned Price said in a statement released on Friday.
“The Secretary will travel to Kyiv, Ukraine, May 5-6, where he will meet with President [Volodymyr] Zelensky, Foreign Minister [Dmytro] Kuleba, other officials and representatives of Ukrainian civil society to reaffirm unwavering U.S. support for Ukraine’s sovereignty and territorial integrity in the face of Russia’s ongoing aggression,” the spokesperson said.
“He will also encourage continued progress on Ukraine’s institutional reform agenda, particularly anti-corruption action, which is key to securing Ukraine’s democratic institutions, economic prosperity, and Euro-Atlantic future,” the spokesperson said.
Earlier, Ukrainian Foreign Minister Kuleba said that during a meeting with Blinken he plans to discuss the assistance that the United States can provide to Ukraine in the reform process, as well as a number of economic issues, especially in the energy sector.