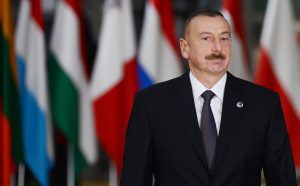 The Ministries of Foreign Affairs of Ukraine and Azerbaijan have agreed to prepare for the official visit of President of Azerbaijan Ilham Aliyev to Ukraine before the end of 2020, the press service of the Ministry of Foreign Affairs of Ukraine said.
“On June 17, another round of political consultations took place at the level of Deputy Foreign Ministers of Ukraine Vasyl Bodnar and the Republic of Azerbaijan Khalaf Khalafov in the form of a videoconference, during which further cooperation was comprehensively discussed, including on supporting the territorial integrity of both states and certain aspects of the policy regarding the occupied territories,” the ministry said in a statement.
Thus, the diplomats emphasized the importance of maintaining the existing dynamics of political dialogue and agreed to concentrate efforts on preparing the official visit of Azerbaijani President Aliyev to Ukraine before the end of 2020.
“I’m sure that the official visit of the Azerbaijani leader to Ukraine will be a significant impetus for strengthening strategic partnerships and will allow serious advancing implementation of joint projects,” Bodnar said.
The parties agreed to intensify the work of ministries and departments to prepare joint initiatives, programs and documents, as well as hold meetings of bilateral working bodies.
Among other things, the parties discussed practical steps to implement projects in the political, trade, economic, energy, transport, cultural, humanitarian and military-technical fields.