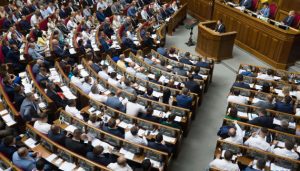 Ukraine’s Verkhovna Rada has adopted at the first reading bill No. 3087-d on the creation of the Bureau of Economic Security, which should become a single body for combating economic crimes and remove the duplication of these functions from various law enforcement agencies.
An Interfax-Ukraine correspondent has reported that the bill was supported by 245 MPs with the required 226 votes.
According to the document, the director of the Bureau is appointed based on the results of a competition and dismissed by the president. However, by the second reading it is planned to amend the bill to reassign the head of this body to the Cabinet of Ministers, said the co-author of the bill and Head of the committee on finance, tax and customs policy Danylo Hetmantsev.
According to him, this is necessary taking into account the decision of the Constitutional Court on the unconstitutionality of the appointment of Artem Sytnyk as director of the National Anti-Corruption Bureau.
As the text of the bill shows, it is proposed to set the maximum number of the Bureau’s employees at 4,000 people. In turn, Hetmantsev said that the current number of employees of the tax police is 4,600.
“The director is accountable to the Verkhovna Rada of Ukraine,” Hetmantsev said.