In November 2020, Donbasenergo PJSC transferred UAH 113.1 million of taxes and other mandatory payments to the state and local budgets, which is 3.2% (UAH 3.7 million) less than in November 2019.
According to the company’s press release, UAH 103.2 million of payments were transferred to the state and local budgets. Donbasenergo also paid UAH 9.9 million of excise tax, which is 3.2% from each UAH 1/kWh of electricity generated.
Electricity generation by the Slovianska TPP in November amounted to 327.948 kWh, in January-November – 2.9 million kWh, and supply – 296.282 kWh and 2.5 million kWh, respectively.

Energy generating company PJSC Donbasenergo in January-September 2020 received a net profit of UAH 1.393 million against UAH 69.257 million of net loss for the same period last year.
According to the company’s statement in the information disclosure system of the National Securities and Stock Market Commission, its net income for the reporting period increased by 9.8% (by UAH 429.648 million), to UAH 4.802 billion, and gross profit by 4.8% (by UAH 16.954 million), to UAH 367.828 million.
Donbasenergo (Sloviansk Thermal Power Plant) in the nine months produced 2.166 billion kWh of electricity (less 11.4% compared to January-September 2019), released 1.948 billion kWh (less by 11.8%), and production of heat energy amounted to 31,311 Gcal (less by 19.8%).
In addition, Donbasenergo announced a general meeting of shareholders scheduled for November 28, 2020, at which, in particular, it is planned to approve reports on the results of the company’s activities for 2019, as well as approve the main directions of the company’s activities for 2020-2022.
As reported, Donbasenergo received a net loss of UAH 68.997 million in 2019 against UAH 104.111 million of net profit in 2018.

PrJSC Donbasenergo, an electricity generating company, in January-March 2020 saw UAH 58.03 million in net profit, which is 26.4 times more than a year ago (UAH 2.198 million).
According to a company report in the information disclosure system of the National Securities and Stock Market Commission, its net revenue over the period grew by 1.3%, to UAH 1.587 billion, while gross profit fell by 17.35, to UAH 164.276 million.
As reported, Donbasenergo in 2019 saw UAH 68.997 million of net loss compared with UAH 104.111 million of net profit in 2018.

A plane chartered by PJSC Donbasenergo on April 19 delivered 12 tonnes of personal protective equipment (PPE) to combat COVID-19 from the Chinese city of Chengdu (Sichuan Province), the company’s press service has said.
According to its data, in particular, the cargo included 15,000 reusable protective suits for doctors, 500,000 disposable masks, 400,000 disposable gloves, 150,000 respirators, 20,000 glasses and protective shields, and 800 non-contact thermometers.
“All these means are intended to protect the public and medical personnel working in the difficult conditions of confronting the deadly disease. Donbasenergo thanks partners from Dongfang Electric International Corporation (Chengdu) who helped implement this difficult project,” the company said.
It is planned that on April 21 most of the PPE will be transferred to the department of health of Donetsk region. 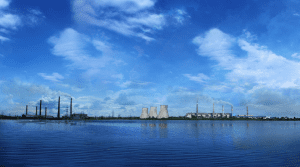 PJSC Donbasenergo transferred UAH 69.7 million of taxes and other obligatory payments to the national and local budgets in March 2020, which is 2.3 times (by UAH 30.1 million) more than in March 2019.
According to the company’s press release, UAH 69.5 million was transferred to the national budget (VAT, environmental tax, fee for special use of water resources, other taxes of the national level), and UAH 300,000 (land tax, immovable property tax, etc.) were paid to the local budget of Donetsk region.
Donbasenergo owns Starobesheve (located in the occupied territory) and Sloviansk thermal power plants (TPP) with the total installed capacity of 2,880 MW, in particular the capacity of Sloviansk TPP is 880 MW. At the end of March 2017, the generation company announced the loss of control over the operation of Starobesheve TPP, as well as part of structural units located in the temporarily uncontrolled territory.
PrJSC Energoinvest Holding owns 60.86% of the shares of Donbasenergo, another 25% of the shares of the generating company are owned by the state. Currently, control of the company belongs to Maksym Yefimov.