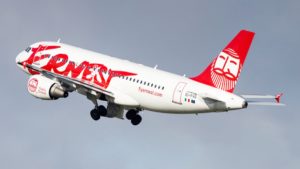 Italy’s Ernest Airlines has opened an office in Kyiv in Podilsky district, an Interfax-Ukraine correspondent reported on Friday.
The company’s new office will also host a call center.
Along with this, the airline announced the opening of a new Ernest Airlines base at Sikorsky Kyiv airport (Zhuliany) in April 2020, the launch of five new routes between Ukraine and Italy: Kyiv-Venice, Kyiv-Bari, Kyiv-Trieste, Lviv-Bologna and Milan-Odesa.
Thanks to the new office in Ukraine, Ernest Airlines plans to strengthen and expand cooperation with Ukrainian travel agencies and tour operators.
As reported, Ernest Airlines plans to invest EUR 100 million in Ukraine in two years and to deploy two aircraft in Kyiv in 2020.