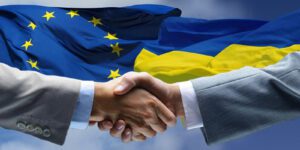 In the key areas in which trade between Ukraine and the EU takes place, the country meets 70-80% European standards, Deputy Prime Minister for European and Euro-Atlantic Integration of Ukraine Olha Stefanishyna said in an interview with the online edition of Radio Liberty on Saturday.
“In the five main areas in which trade takes place, we meet European standards by 70-80%. This has already been confirmed. Energy sector – 80%. Food and sanitary measures – more than 70%. We fully comply with the system of public procurement and telecommunications. This is means that in the understanding of our European integration, we [Ukraine and the EU] work in the same way and live the same,” Stefanishyna said.
She also said that more than 14,000 Ukrainian companies are already operating in the European market.
Ukraine is also the country that is integrated into European structures. The country is a member of more than 20 EU agencies and institutions from law enforcement (this is the European Public Prosecutor’s Office), ending with scientific and cultural programs.
Therefore, according to Stefanishyna, from the point of view of political, economic convergence, Ukraine has actually achieved tremendous results in five years.