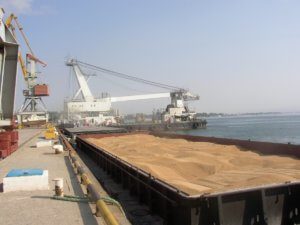 Nika-Tera marine specialized terminal (Mykolaiv), part of Group DF belonging to Dmytro Firtash, has accepted the first batch of grain of the 2018 harvest.
According to a company report on its Facebook page, the first truck with grain from the south of Kherson region with barley of the 2018 harvest was accepted on June 8.
Transshipment of goods at the port as of June 10 amounted to 2 million tonnes.
“The turnover of grains accounts for 61.3% in the structure of cargo turnover at the port. Bulk cargo accounts for 37.19%, and liquid freight for 1.51%,” the report says.
As reported, Nika-Tera in 2017 handled 229 vessels, transshipping 4.17 million tonnes of cargo, which is almost 4% more than in 2016.
Nika-Tera is a modern highly-mechanized marine terminal that is part of the Group DF port business.