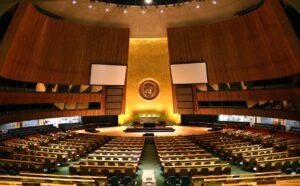 On Monday, September 20, President of Ukraine Volodymyr Zelensky will leave for the United States, where he will take part in the General Assembly of the United Nations, press secretary of the head of the Ukrainian state Serhiy Nykyforov said.
“It is already official statement that on Monday, the visit of the President of Ukraine to the United States will start. Volodymyr Zelensky will take part in the UN General Assembly, make a speech there, and he will also have a number of bilateral meetings with leaders of other states, with representatives of international organizations, in particular with the UN Secretary General, business representatives, investors and the Ukrainian community in the United States,” Nykyforov said at a briefing on Friday.