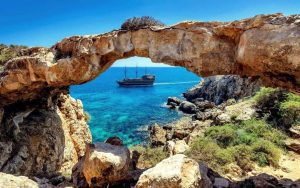 Since March 1, Cyprus has included Ukraine in the list of countries of the “grey one,” entry from which is allowed only to citizens of Cyprus and family members, as well as residents and holders of special permits, the consular section of the Ukrainian Embassy in Cyprus said.
“Since March 1, 2021, the distribution of countries of the world by categories has been applied in Cyprus. As of March 1, Ukraine belongs to the ‘grey zone’ (categories will be reviewed weekly). Follow further changes,” the consular department said on Facebook on Monday.
According to the information of the embassy, entry from the countries of the “grey zone” is only allowed to citizens of Cyprus permanently residing in the Republic of Cyprus, their foreign spouses and minor children, residents of the Republic of Cyprus, persons who are allowed to enter in accordance with the Vienna Convention, regardless of their citizenship, who have have a special entry permit from the government of Cyprus; citizens who have received special permission from the Government of Cyprus to enter Cyprus.