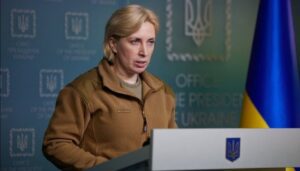 “Nine humanitarian corridors have been agreed, Donetsk region from Mariupol to Zaporizhia… Berdiansk – Zaporizhia. Some 24 buses are now at the entrance to Berdiansk. From 10 o’clock they will be brought to start the evacuation,” Vereschuk said at a briefing on Wednesday.

According to her, humanitarian corridors are also planned in Zaporizhia region: Polohy – Zaporizhia, Huliaipole – Zaporizhia;

“These routes will also pass through other cities, where stops will be made to collect people, Lysychansk, Severodonetsk…,” Vereschuk said. 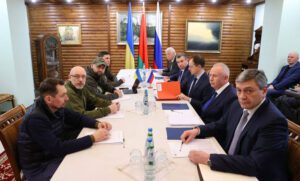 The third round of Ukraine-Russia talks has produced small positive shifts in the matter of providing humanitarian corridors, an advisor of the head of Ukraine’s presidential office, said.
“Third round of talks is over. Small positive shifts to improve the logistics of humanitarian corridors,” Mykhailo Podolyak tweeted on Monday.
The corridors will be altered for a more efficient evacuation, he said.
As for the other issues, intense consultations continue, he said.
“From the standpoint of the key political trek – ceasefire, reconciliation, cessation of hostilities – intense consultations will continue. As of today, there is no result to make any considerable improvement in the situation. Still, yet again I want to stress: the consultations will continue and we will get the results,” Podolyak said.
Today’s talks lasted more than three hours in Belavezhskaya Pushcha, Brest region, Belarus, the same place where they were held the last time on March 3. The first round was held in Gomel region on February 28. 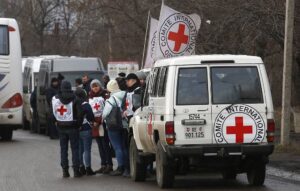 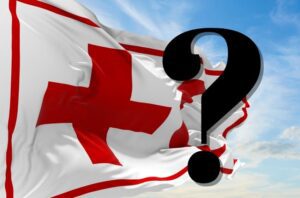 The Ukrainian state asks the International Committee of the Red Cross (ICRC) to urgently take the necessary steps to organize humanitarian corridors and is ready, for its part, to do everything necessary to evacuate the civilian population and deliver humanitarian supplies.
Settlements in the areas of hostilities that require the creation of humanitarian corridors are located in Sumy region (Sumy, Shostka, Romny, Konotop, Okhtyrka), Chernihiv region (eastern and northern parts), Kharkiv region (all of the region except the south-eastern parts), Kyiv (Bucha, Irpin, Vyshgorod, Ivankiv, Vasylkiv, Borodianka), Mykolaiv region (Bashtansky, Snihuriv, Bereznehuvatsky directions), Zaporizhia region (Tokmatsky, Berdiansk, Velykobilozersky directions), Kherson (Chaplynka, Kalanchak, Henichesk and Nova Kakhovka directions), Luhansk and Donetsk regions (Volnovakha district, Mariupol district), etc.
The Ukrainian side is ready to ensure the transportation of people and the delivery of humanitarian goods. The Ukrainian Armed Forces guarantee safe passage of the corridor. Ukraine is expecting this from the Russian side.