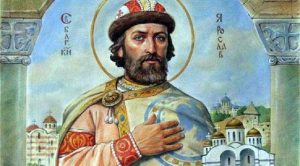 The pharmaceutical company Interchem (Odesa), the double liability company, within the framework of patronage support, has invested UAH 2 million in the project of a unique 3D hologram of the real face of Yaroslav the Wise, which is installed in Saint Sophia Cathedral in Kyiv, Director General of Interchem Anatoliy Reder has said.
“We have invested UAH 2 million in this project. There are plans for further cooperation and new projects,” he told Interfax-Ukraine during a presentation on Thursday, March 4.
Reder noted that recent studies in Saint Sophia Cathedral’s nature reserve made it possible to visualize the authentic features of Yaroslav the Wise. Unique Danish equipment was used for visualization.
The project allows to see the face of Yaroslav the Wise, as he could have been at the age of about 45, while the canonical image of the prince, restored from his skull, creates an appearance similar to the appearance of the Russian monarchs. In this guise, Prince Yaroslav is represented at a much older age.
As reported earlier, Interchem was one of the patrons of the project to drain the foundations and walls of Saint Sophia Cathedral and adjacent monastic buildings from excess moisture using the Swiss technology BioDry.
Saint Sophia Cathedral is one of the historical sites included in the UNESCO World Heritage List. The cathedral is the spiritual center, where the unique knowledge base of the Ukrainian people for the last millennium is concentrated. Thanks to the patrons who restored the cathedral in different historical epochs after enemy invasions and natural disasters, its ancient architecture and the world’s most complete ensemble of original mosaics and frescoes of the 11th century have been preserved. It has 260 square meters of mosaics and 3,000 square meters of frescoes. 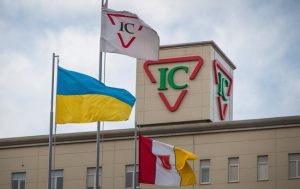 The pharmaceutical company Interchem (Odesa), the double liability company, is developing a new anesthetic drug, preparing an international dossier for it, Director General of Interchem Anatoliy Reder has said.

“The drug will be an anesthetic. It is original, completely new, it is a new molecule. We have been deeply studying it for three or four years,” he said in an exclusive interview with Interfax-Ukraine.

Reder said that the company will develop a dossier for this drug in accordance with international standards.

Reder said that the company has begun collaborating with an international research organization that will conduct preclinical trials of the new drug.

According to Reder’s forecasts, the development of the new drug could take one and a half or two years.

“We hope that within one and a half or two years the pills will appear in Ukraine,” he said.

Interchem is one of the leading pharmaceutical companies in the country. 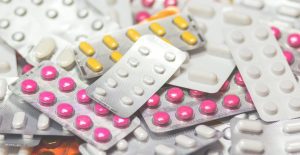 Double liability company Interchem, a pharmaceutical company based in Odesa, has received the permit of the Health Ministry of Ukraine for conducting clinical testing of antiviral medicine Amixin for effectiveness in treatment of coronavirus (COVID-19).
Director General of the company Anatoliy Reder told Interfax-Ukraine that a respective decree of the Health Ministry was signed on May 14.
He also said that the company requested the consideration of the application on clinical trials of Amixin due to the fact that the medicine had previously shown its effectiveness against a number of dangerous viral infections. During preclinical trials, it was proved that tilorone (the active substance of Amixin medicine) has antiviral activity against a number of strains of ordinary coronaviruses.
Several international research centers have already conducted and are carrying out testing of tilorone against SARS-CoV-2 coronavirus.
“As we can see, not only do we consider Amixin as a potentially effective medicine against COVID-19, but also researchers abroad,” he said.
Reder said that, in particular, such trials were conducted at the Institut Pasteur Korea (South Korea), and in two research centers in the United States as well.
“Based on the data of preclinical trials showing the highly effective antiviral effect of tilorone against SARS-CoV-2, we applied to the Health Ministry for approval of the third phase of clinical testing to expand the range of use of Amixin medicine and obtain evidence on its efficiency and safety for treating patients with COVID-19 infection,” he said.
According to Reder, clinical trials of Amixin will be conducted by research centers in three cities of Ukraine. In general, a trial may take three to four months from the moment the Health Ministry gave a permit for conducting it to the pharmaceutical company.
“The duration of the clinical trial will primarily depend on the speed of patient enrollment. At this stage, it is planned to include more than 60 volunteers in the study who, according to the severity of the disease, will be on self-isolation and undergo outpatient treatment,” he said.
Reder said that the research doctors who confirmed their readiness to conduct this trial are highly motivated, first of all, by their scientific interest and the opportunity to make their contribution to the search for a solution, which is so urgent for the whole world of medical and social problem that the new coronavirus has become.
Interchem is one of the leading pharmaceutical companies in the country. 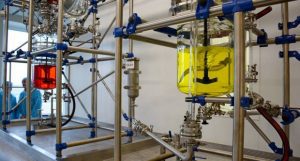 Double liability company Interchem, a pharmaceutical company based in Odesa, has bought equipment for polymerase chain reaction (PCR) testing for the virus laboratory of the Odesa Regional Laboratory Center of the Health Ministry of Ukraine.
Interchem Director General Anatoliy Reder told Interfax-Ukraine that this equipment was the first system in the regional laboratory, which makes it possible to perform PCR testing of the COVID-19 infection.
“Until today, in Odesa region there was not a single device on which it was possible to perform such a PCR test. Odesa region was not able to perform such tests on its own, the virus laboratory of the state-owned institution Odesa Regional Laboratory Center of the Health Ministry of Ukraine was forced to act as a logistician: to collect biomaterial from the centers where it was taken, and then send it to Kyiv. Thus, the results were only on the fifth day. This is what we must avoid, as if we are forced to wait five days for a response from the laboratory, all other methods of fighting the virus are becoming meaningless,” he said.
Reder said that the system for PCR testing has already been installed and began to work.
In addition, Interchem purchased the first batch of tests for this system.
“We hope that the PCR tests, which are procured centrally, will also come to Odesa region. As world experience shows, those countries in which it was possible to achieve a high level of coverage of population with testing and diagnostics demonstrate the lowest results in mortality and the spread of infection,” Reder said.
He also said that the purchased PCR testing system will be in demand after the end of the COVID-19 pandemic.
Interchem is one of the leading pharmaceutical companies in the country.

INTERCHEM TO SEND OVER UAH 2.5 MLN TO EQUIP ODESA HOSPITAL 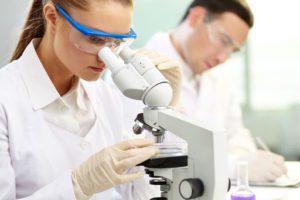 Pharmaceutical doubled liability company Interchem will send over UAH 2.5 million to equip Odesa infectious diseases hospital with medical equipment and medicines. Interchem Director General Anatoliy Reder told Interfax-Ukraine that the company took into account the real needs of the hospital.
“Interchem joined in the fight against coronavirus. We tried to take a balanced approach, listening carefully to the needs of the infectious diseases hospital, and did not begin to deliver artificial lungs ventilators, because, according to doctors, a sufficient amount of ventilators was available. We decided to meet urgent needs which are no less important,” he said.
In particular, the company purchases a portable ultrasound machine for the hospital, which will minimize the movement of infected patients in the clinic and greatly facilitate diagnostic procedures for doctors.
In addition, Interchem buys oxygen concentrators, pulse oximeters, and other necessary equipment for the infectious diseases hospital.
“We will listen very carefully to the needs of the clinic and, above all, and respond to the requirements of medical professionals,” he said.
Reder also said that the company transferred the antiviral drug Amixin to the Odesa infectious diseases hospital, which is used, in particular, to protect medical personnel.
“We are by no means claiming that this is a drug to treat the coronavirus diseases COVID-19 circulating now, but we know for sure: this is an antiviral drug that will prevent medical personnel from getting ill with ordinary viral infections,” he said.
According to Reder, Interchem switched to a seven-day workweek because of the increased need for medications, not just from the antiviral group.
“Manufacturers today received the list of the Ministry of Health with medicines that hospitals should be provided with in accordance with WHO recommendations. This list contains drugs manufactured by Interchem,” he said, noting that this is, in particular, about painkillers, anticonvulsants and anxiolytic drugs.
Reder also said that the entire staff of the company is being transported to and from work by company buses.
“In some ways, it is easier for us, we didn’t have a problem with the delivery of people, because we always bring staff by our buses,” he said.
Reder also said that Interchem will reformat production processes in order to increase the production of the most popular drugs today and reduce the production of less relevant ones.
Pharmaceutical doubled liability company Interchem is one of the leading pharmaceutical companies in the country. 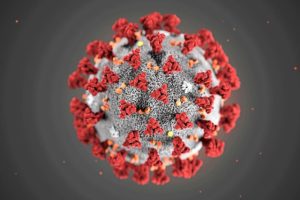 Interchem double liability company (Odesa) donated 200,000 0 doses of an antiviral drug to border guards and medical workers to prevent infection with Chinese coronavirus. Interchem CEO Anatoliy Reder told Interfax-Ukraine that an agreement was reached during a meeting with Secretary of the National Security and Defense Council of Ukraine (NSDC) Oleksiy Danilov.
“The main parameters of our proposal are that we offer help and help for free. There are services that are the first to deal with patients who are infected with viruses and have high infection risks. These are border guards, who are staying at the entrance to the country, and employees of infectious hospitals. We will deliver a drug for prevention to employees of State Border Guard Service to all regions of Ukraine and to doctors and medical staff in all infectious hospitals, which are defined as basic medical facilities for hospitalization of those infected with Chinese coronavirus,” he said.
At the same time, Reder said that this is not about treatment, but exclusively about prevention.
“We do not pretend to have a panacea. We do not say that we have a cure for the Chinese coronavirus in our hands. However, we know for sure that the use of the drug gives an additional chance not to get sick,” he said.
Reder said that this drug has a proven immunomodulatory and antiviral effect.
Interchem is one of the leading pharmaceutical companies in Ukraine. It was founded in 1992. It is the only Ukrainian manufacturer of medicines for hard and cancer patients, as well as one of the drug suppliers under the Global Fund to Fight AIDS, Tuberculosis and Malaria programs.