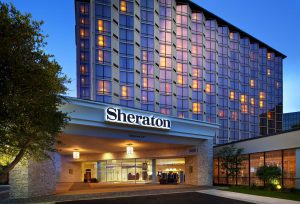 The Board of Directors of the U.S. International Development Finance Corporation (DFC) has approved the allocation of $27 million for building Sheraton Hotel in Kyiv.
“A $27 million loan will support the construction and operation of a Sheraton hotel in Kyiv, Ukraine that will create jobs, build local supply chains, and encourage trade, investment, and economic growth,” DFC said in a press release.
The construction of the five-star Sheraton Kyiv Olympiysky hotel in the territory of the Olympiysky Stadium is being carried out by Construction Investment Company TM, which signed a hotel management agreement with the hotel operator Marriott Hotels & Resort.
According to the company’s website, Sheraton Kyiv Olympiysky is a 14-storey building with 196 rooms, 178 of which are standard rooms and deluxe rooms, 15 luxury rooms, two rooms for people with disabilities and one presidential room. The infrastructure includes an underground parking for 144 cars.
Construction Investment Company TM was founded in 2004, its core business is construction of residential and non-residential buildings.

The German company Reisswolf, which provides services for storing and destroying information, has opened its representative office Reisswolf Ukraine in Kyiv.
According to a report of the company released on Tuesday, the capacity of the first archival storage located in Kyiv is 200,000 archive boxes or about 3,000 tonnes of paper.
In addition to offsite storage, Reisswolf Ukraine will provide archival processing, digitization, electronic archiving and confidential destruction of documents.
“The security of document storage is achieved by three-level protection and depersonalization of boxes, when identification occurs exclusively by bar codes. Digitized documents are stored on servers located in the EU,” the company said.
According to Director of Reisswolf Ukraine Serhiy Aloni, there are already operators of archival storage on the Ukrainian market.
“Reisswolf Ukraine sees its role in making storage, digitization and other procedures with business documents familiar to companies of any level, including sole proprietorship,” he said.
The company estimates the volume of the Ukrainian archive storage market at 2 million boxes per year, noting that today only 10% of Ukrainian companies use archive storage services, while in Europe this figure reaches 65-70%.
“In the next five years, Reisswolf plans to expand its presence in other large cities of Ukraine – Kharkiv, Odesa, Lviv, and Dnipro,” the company said. 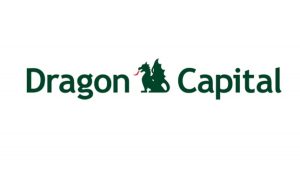 Dragon Capital investment company has developed a concept for the E40 Industrial Park with an area of 200,000 square meters on the 27th kilometer of the Zhytomyr highway (Kolonschyna village, Kyiv region), plans to start the construction of the first stage in 2021.
“According to the developed concept, the total area of the buildings of the industrial park will be 200,000 square meters, including class A production and storage facilities, cross-docking terminals, office, utility and infrastructure facilities (a hotel, a truck service station, etc.),” it said in a press release.
According to the report, the project will be located on a front land plot with an area of 49 hectares.
“Thanks to the support of Makariv Regional State Administration, as well as the Regional Development Agency of Kyiv region, Dragon Capital managed to develop and approve a detailed plan of the territory as quickly as possible. This will allow the company to proceed to the next step in the implementation of the project – the development of project documentation. Our company plans to start building the first stage of the E40 Industrial Park in 2021,” the report says.
As reported, Dragon Capital acquired the relevant plots in 2018 from Europolis GmbH, which is part of the large real estate concern CA Immo Group (Vienna, Austria).
Dragon Capital is one of the largest groups of companies in Ukraine that operates in the field of investment and financial services and provides a full range of investment banking and brokerage services, direct investments, asset management for institutional, corporate and private clients. 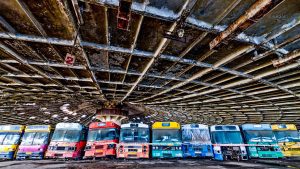 Bastion-Group LLC that privatized SE Kyivpasservis in May 2020 intends to start the wide-scale enhancing of the capital and regional bus stations.
According to Kyivpasservis Marketing Director Dmytro Ozhihov, Kyiv Central Bus Station is the first in line for enhancing.
“We have already received all legal permits and documents for enhancing Kyiv Central Bus Station, its plan and design are ready to be published soon,” Ozhihov said.
The private investor plans to create an international transport hub based on Kyiv Central Bus Station and develop a European bus service culture.
In the new bus station, it is planned to equip modern food courts, information boards throughout its territory, recreation areas, as well as a medical office to assist passengers and provide preliminary examination of drivers.
The new project of the bus station takes into account all the requirements for infrastructure use by disabled passengers.
In the future, it is planned to build a modern hotel for short time guests waiting for runs or staying overnight at the bus station. 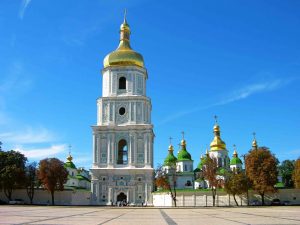 Double liability company Interchem (Odesa) and PrJSC Darnitsa pharmaceutical firm (Kyiv), together with the Zagoriy Foundation, have implemented a project to drain the foundations and walls of the Saint Sophia’s Cathedral and adjacent monasteries from excess moisture using the BioDry Swiss technology.
Director General of the Sophia of Kyiv national conservation area Nelia Kukovalska said at the presentation of the project on Wednesday, the project cost was UAH 4 million, the pharmaceutical companies provided UAH 2 million each.
“At present, the humidity of the walls and foundations of the Saint Sophia’s Cathedral is three to four times higher than it is normal. The use of BioDry technology will reduce the humidity by a third during the first year, and within three to four years it will reach the normal humidity of the monument,” she said.
Kukovalska said that currently BioDry equipment is installed in all monuments of the Saint Sophia’s Cathedral.
“The walls of the cathedral do not have waterproofing and are being damaged. When we learned about the threat to the Saint Sophia’s Cathedral due to excessive moisture, we did not hesitate for a second. We were able to find partners with whom we implemented this project. Today, we see moisture leaving the walls, Sophia he is “recovering.” We are glad that we helped the main symbol of spirituality to survive,” Director General of the pharmaceutical company Interchem Anatoliy Reder said.
In turn, Board Chairman of Darnitsa Group Dmytro Shymkiv said that for the implementation of the project the most innovative solution was found, which is used to preserve cultural monuments in the world.
“This technology is biocompatible with the environment. It already works and naturally eliminates the prime cause of moisture in the foundation and walls,” he said.
Co-founder of the Zagoriy Foundation Kateryna Zagoriy said that “the reconstruction of the Saint Sophia’s Cathedral during the time of Ivan Mazepa was a symbol of the restoration of Ukraine after the Ruins.”
“I am confident that this joint project of the pharmaceutical companies will become another important step towards restoring the culture of charity in our country,” she said.
For his part, Eustratius (Zorya), Deputy Head of the External Church Relations department of the Orthodox Church of Ukraine (OCU) said that at present in Ukraine “a huge number of churches are being destroyed.”
“It is important for Ukrainian society to form a culture of patronage. With all due respect to the state, the patron will always invest more effectively in projects. We, the OCU, are working to attract patrons through the structures that our church has created, including through the Mazepa Foundation created by the Metropolitan’s Foundation of the Orthodox Church of Ukraine to implement projects for the preservation and support of monuments. We have a huge number of monuments, more than the number of patrons,” he said.
Eustratius said that, despite the fact that “over the past 30 years, much has been done to revive churches, hundreds of churches throughout Ukraine need to be taken care of, and dozens of churches require prompt intervention to preserve them.”
“Usually these are churches that are located in villages. They are in such a state that local communities are not able to support them,” he said.
Kukovalska said that the Bursa (Seminary) building on the territory of the Saint Sophia’s Cathedral is currently in the most critical condition, the cost of restoration of which is about UAH 162 million.
“Today, there is a big problem that has not been resolved for years and can lead to the destruction of the 17th century monument. Unfortunately, the tenant has not left for two years, he does not vacate the premises. We fear that in the near future serious destruction may occur, some of the premises will perish,” she said. 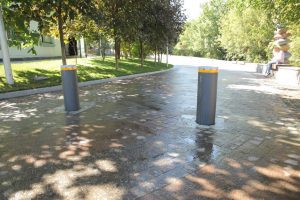 Almost all works were carried out manually, because it is impossible to use heavy equipment at the object, co-owner of the company Yevhen Konovalov told Interfax-Ukraine.
The new alleys were paved with uniform pattern granite tiles and new street light poles with modern LED lamps were installed, the company said.
The stairs, lecture center and art compositions were decorated with lighting.
Also, the retaining wall was reinforced. Benches were installed. New trees and shrubs were planted.
Automatic retractable poles were installed to limit access of vehicles to the alley. In addition, the runoff water system was replaced.
Peizazhna Alley is a landmark in central Kyiv. A view of Podil and the Dnipro River opens from the observation platform, which is located in the Upper City.
The alley was constructed in 1980. Sculptures, art installations and a square appeared there as time went on.
The facility requires an extensive overhaul. The second stage of the modernization starts in the near future and will be completed in 2021.
The project was carried out by Rostdorstroy LLC, a part of the RDS group of road construction companies, which won a tender worth UAH 110 million at the beginning of 2020.
RDS Group is included in the top three road construction companies of Ukraine. It includes Kyivshliakhbud and Rostdorstroy. The core business is construction, reconstruction and maintenance of roads and bridges, construction of airfield complexes.
As of July 2020, the company worked in nine regions of Ukraine and had ten production facilities. In particular, it was constructing concrete road N-14 Kropyvnytsky-Mykolaiv, a railway overpass road and a section of the first in Ukraine concrete road within the framework of the overhauls of highway N-31 Dnipro-Reshetylivka in Poltava region. In 2019, the company won a World Bank’s tender for works on first-category highway M-03 Kyiv-Kharkiv-Dovzhansky.
The ultimate beneficial owners of RDS Group are Ukrainian citizens Yuriy Shumakher and Yevhen Konovalov.