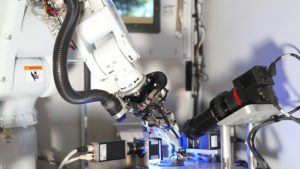 The U.S. Jabil Circuit has invested $16 million in the construction of a second stage of the electronics manufacturing site in the village of Rozivka, Zakarpattia region, Jabil Director General in Ukraine Serhiy Kartsev told reporters at the presentation of the plant on Friday. With the opening of the second stage, the site’s area has doubled to 46,600 square meters, and in the short term, Jabil plans to increase the staff to 5,000.
“Since the founding of the first Jabil manufacturing site in Ukraine, we have invested over $2 million in infrastructure facilities, which were later transferred to the village council. In particular, we built two new wastewater treatment plants, one of which is intended for Rozivka and it is our contribution to development of the environment protection in the region,” Kartsev said.
According to Kartsev, the Jabil plant in Uzhgorod is the only one in Europe engaged in the production of full-cycle products, the plant is constantly expanding its production capacity.
The plant also collaborates with more than 20 universities of Ukraine, including 25 engineering faculties, which programs have certain specifications for work with Jabil.
About 65% of the volume of products manufactured at the site is intended for the telecom industry. Also, Uzhgorod plant produces goods for the smart home market, consumer goods and goods for the automotive industry.
Mobile phones, media players and PCs for exports to the European Union will be assembled at the new site.
Jabil Circuit is among top three global leaders among companies offering supply chain solutions. Electronics for Nespresso, Ceragon, Sagemcom, SIAE Microelettronica, DUCATI Energia, SIT and TeleTec brands is assembled at the Uzhgorod site
Jabil is an electronic product solutions company providing comprehensive electronics design, production and product management services to global electronics and technology companies.
The first manufacturing site in Zakarpattia region was launched in 2004. As of early 2019, around 3,000 employees worked there.