Construction of another plant starts at Bila Tserkva industrial park 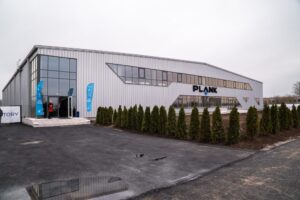 The construction of another plant began in the Bila Tserkva industrial park (Kyiv region), the launch is scheduled for November 1, UFuture founder Vasyl Khmelnytsky told Interfax-Ukraine.
“During the war, we felt a big request from Ukrainian manufacturers from the regions to relocate to the Bila Tserkva industrial park. They have an alternative – moving to the EU, but it is important for the economy to leave producers in the country: these are taxes, jobs and development. Today we’ve started the construction of a new modern facility for a plant on 4,000 sq m. The amount of investment will be approximately $2 million,” he said.
Khmelnytsky added that this project will be the company’s record for the speed of construction.
“Already on November 1, we will launch production there. Now we are negotiating with several applicants from Mykolaiv and Kharkiv,” Khmelnytsky said.
UFuture holding company of businessman Khmelnytsky, as part of a business strategy in 2022, planned to expand the number of production facilities in Bila Tserkva industrial park from five to 11. Earlier, in an interview with the Interfax-Ukraine agency, he said that 11,000 sq m of industrial premises will be built in this park for the relocation of enterprises, the estimated investment is $6.5 million. In general, the entrepreneur announced plans the construction of 30 factories in Bila Tserkva.

Construction of over 5,700 objects starts in Ukraine since war start 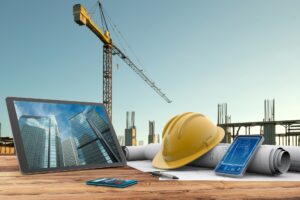 The State Inspectorate for Architecture and Urban Planning of Ukraine processed over 16,000 requests from customers during the period of martial law, its press service reported.
“It is too early to talk about the restoration of the pre-war pace of construction, there are areas where it is not being carried out at all, however, we note a positive trend towards intensifying construction compared to previous months,” the inspectorate said in a Facebook post.
According to it, for the period from March 15 to July 15, the chief inspectors of the construction supervision processed 5,700 messages about the start of construction work and 420 permits for their implementation, as well as 8,900 declarations about the readiness of the facility for operation (including amnesty), and 344 certificates of acceptance of the object into operation. At the same time, 1,300 changes were made to messages, declarations and permits.
The inspectorate notes that most of the applications for the acceptance of objects into operation during martial law came from Kyiv region. At the same time, customers from Lviv, Kyiv, Khmelnytsky regions most actively applied for a permit for construction work.
According to it, a significant part of the issued construction permits relate to the overhaul or reconstruction of social infrastructure facilities, especially medical facilities. Among the applications received for new construction: a sheet glass plant in Kyiv region, a kindergarten-nursery in Dnipropetrovsk region, a water park in Zakarpattia regions, etc. 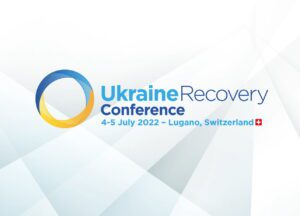 On July 4, an international conference for the restoration of Ukraine started in Lugano, Switzerland. Among the main decisions taken on the first day of the conference, one can single out the approval of a plan to provide Ukraine with macro-financial assistance in the amount of $750 billion. Of this total, from 150 to 250 billion is expected to be directed to the restoration of infrastructure and housing damaged as a result of hostilities.
At the same time, the mechanisms for the practical implementation of this project remain unclear in the context of the ongoing war and the need to adapt legislation to it and establish partnerships between the state and private companies. Portal Open4business turned to Igor Stakovychenko, an expert in the field of construction and real estate, for a comment.
In his opinion, the practical implementation of the project should be started now at all levels, since delaying the process can lead to negative consequences in the autumn-winter period.
“Mechanisms for allocating funds from the confiscated assets of the Russian Federation and its large businesses are already being implemented by individual countries. We, in turn, need to implement the conversion of these financial assets into specific infrastructure and construction projects by creating representative offices in donor countries and coordination centers in Ukraine,” said Ihor Stakovychenko.
The expert also stressed that the regional principle of recovery, now promoted by the country’s leadership, when a separate partner state is engaged in projects in a separate Ukrainian region, is the most effective at this stage.
In addition, Igor Stakovychenko suggested creating a system of decentralized funding for the implementation of individual projects at the local level.
“But we must not forget about our responsibility to our partners. It is necessary not only to minimize, but to completely exclude the possibility of misuse of foreign aid by local officials. To do this, it is necessary to create a separate trust fund for each individual restoration project, the activities of which will be as transparent and controlled as possible by both the Ukrainian anti-corruption authorities and the donor country,” Ihor Stakovychenko emphasized.
According to the expert, the basis for the creation of such funds should be existing budget programs, as well as amendments to the main financial document.
“In fact, now we can receive funds both in the form of direct assistance and in the form of investments from partners. Here it is important to successfully implement and present the first major restoration projects, which will help increase investment attractiveness even in the current conditions,” added Igor Stakovychenko. 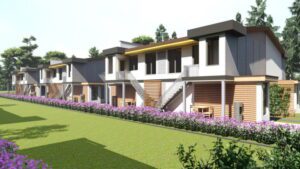 On July 1, the “Register of Destruction” is launched in Ukraine. With its help, homeowners whose houses and apartments were damaged as a result of hostilities and enemy shelling will be able to apply for compensation using the Diya application.

At the same time, the question of what the restored houses of Ukrainians will be like, taking into account the new realities and requirements for the housing stock after the war, remains no less important. The Open4business portal discussed these issues with Igor Stakovichenko, an expert in the field of construction and real estate.

“The introduction of the “Register of Destruction” will greatly simplify the procedure for compensating for damages for affected citizens. In fact, such a registry will bring together all the data on the destruction in the country. This will be very useful both for the state of Ukraine and for individual citizens when receiving compensation from the aggressor through international legal institutions,” the expert noted.

As for the new technologies that will be used in the construction of housing, here Stakovichenko recommends first of all to focus on the needs of society.

“What most people want from a new home, whose homes have been destroyed by the war, is reliability and security. The presence of equipped bomb shelters, convenient evacuation routes, autonomy – these are the criteria without which it is difficult to imagine post-war architecture,” Igor Stakovichenko stressed.

In his opinion, a good option would be the restoration and development of numerous recreational areas, some of which were abandoned even before the war. Stakovichenko believes that many Soviet-built sanatoriums and boarding houses, which have been practically not used for all the years of independence, can become a good platform for building eco-friendly settlements with autonomous service, since most of the communications have already been connected to them.

“Environmental friendliness and high technologies during construction will also become the hallmark of post-war architecture in Ukraine. Projects such as “zero energy houses”, or even “mini-power houses”, which are now being widely implemented in the EU, will also be popular after the war,” the expert added.

At the same time, Igor Stakovichenko sees no special prospects for aggressive development in the central areas of large cities, which was practiced before the war.

“Multi-apartment residential complexes in large cities will certainly continue to be built, but whether there is a buyer for such housing is already a question. I think many have already revised or will reconsider their views on comfortable housing as a result of the war,” the expert concluded. 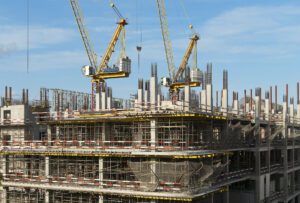 The war caused and continues to cause significant damage to the economy of Ukraine. Today, perhaps, the construction and real estate markets suffered the most from the hostilities. Thus, the report of the National Bank of Ukraine “On Financial Stability” dated June 17, 2022 indicates that since the beginning of the war, the market has practically stopped, both in terms of construction and the sale of housing. At the same time, according to the NBU, the situation has begun to level off in recent weeks, and above all in the regions that are least affected by the destruction from the war. 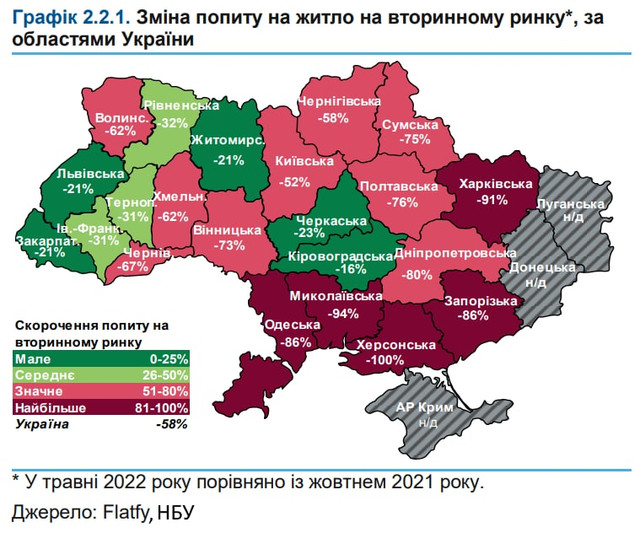 The most favorable situation is in the western regions of the country, while the National Bank notes that a number of significant problems remain there. First of all, this is a market imbalance, when the prices declared by sellers are not supported by demand and are supported artificially.

As for construction, here, according to the regulator, the situation is more optimistic. Developers have restored work on almost 50% of the facilities in the country. The most positive dynamics is observed in the western regions, in the center and in the Odessa region. 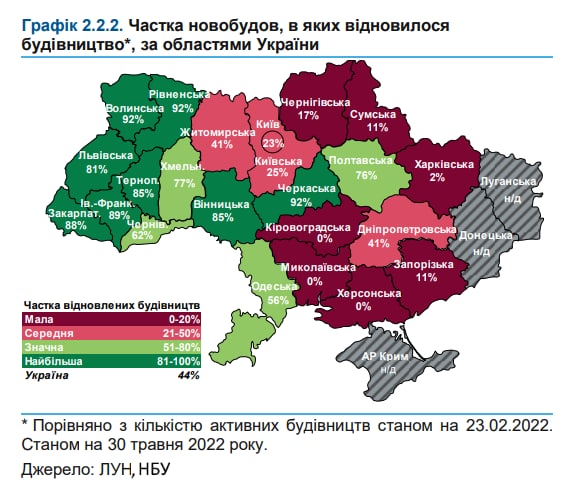 As for the office real estate market, according to the NBU, it suffered to a greater extent from the massive transition of staff to remote work.

The Open4business portal asked financial expert Igor Stakovichenko to comment on the current situation. In his opinion, the severity of the crisis in the real estate market directly depends primarily on the intensity of hostilities in various regions of the country, as well as on the well-being of the population.

“We see that the demand for housing in the same Kharkiv and Dnipro collapsed almost equally. At the same time, housing construction in Kharkiv is at a standstill, while in Dnipro it is being restored. This is due to the risk assessment by developers, since the Kharkiv region is now under devastating shelling by the aggressor,” the expert believes.

In his opinion, most of the prices in both the primary and secondary markets are dictated by the overestimated expectations of developers who continue to hope to find a buyer for their goods despite changes in the economy and a decrease in the income of part of the population.

“Builders think in the old way, and form the price based on the cost and those mark-ups that were fair in the pre-war period. Buyers have become much more cautious and assess the risks, in particular, the presence of bomb shelters, evacuation routes, and so on. As for the secondary market, here prices are often drawn from the ceiling, hoping more for luck, ”said Stakovichenko.

According to the expert, market recovery can be expected after the end of the war, when the demand for housing will increase and investors’ fears will decrease. 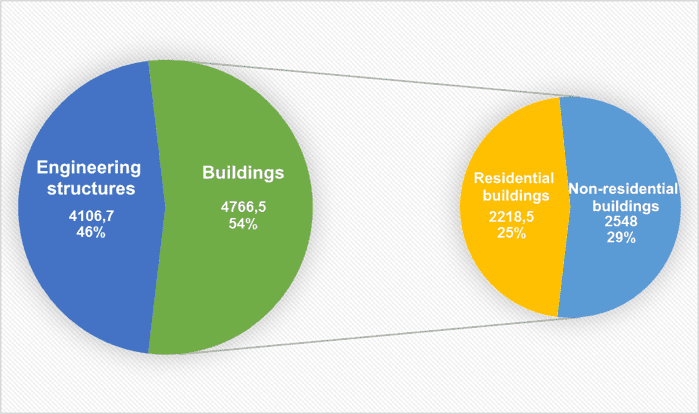