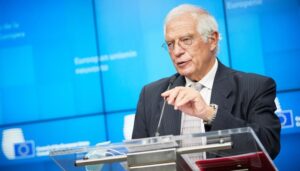 The European Union will provide an additional EUR 500 million in military assistance to Ukraine, bringing the total amount of aid to EUR 2 billion, High Representative of the EU for Foreign Affairs and Security Policy Josep Borrell said on Friday.
He said the European Union would provide a new tranche of EUR 500 million to provide military assistance to Ukraine, thus, bringing the total amount to EUR 2 billion. 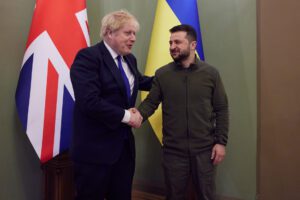 British Prime Minister Boris Johnson in an address to the Verkhovna Rada announced the provision of assistance to Kyiv for GBP 300 million, MPs say.
“Boris Johnson appealed to the Verkhovna Rada. Volodymyr Zelensky answered him and spoke to the Verkhovna Rada for the first time since the beginning of the war,” Oleksiy Honcharenko, a deputy of the European Solidarity faction, wrote in his Telegram channel, noting that Johnson announced a new military aid package, including missiles and counter-battery radars.
In turn, a member of the Holos faction, Yaroslav Zhelezniak, specified that Johnson announced the provision of new weapons and protective equipment for GBP300 million, including “radar for anti-artillery.”
Earlier, the office of the British prime minister reported that London intends to provide Ukraine with military assistance for another GBP300 million ($375 million). 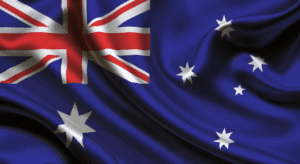 The Australian Government has announced further military support to the Government of Ukraine in response to Russia’s relentless and illegal aggression and an additional A$26.5 million worth of A$26.5 million ($19.4 million at current exchange rates) for the Ukrainian Armed Forces.
“This brings Australia’s total military assistance to date to approximately A$191.5 million (approximately $143 million),” Australian Prime Minister Scott Morrison and Defense Secretary Peter Dutton said in a joint press release. (Peter Dutton) Friday.
They indicated that the support is in addition to the $38 million worth of 20 Bushmaster armored personnel carriers that were announced free of charge to Ukraine earlier in the day.
The release clarifies that the government will not disclose specific details of the new aid package or delivery scheme at the direct request of Ukrainian officials and other partners.
“Our government will continue to identify opportunities for further military assistance where it can quickly provide the necessary capabilities to the Ukrainian Armed Forces. Australia may be thousands of miles away, but we stand shoulder to shoulder with Ukraine against this illegal incursion, providing weapons, equipment and even energy carriers,” the Prime Minister and Minister of Defense of Australia emphasized.
As reported, in addition to military support, Australia’s humanitarian aid to Ukraine at the end of March amounted to almost $50 million, as well as 70,000 tons of thermal coal. 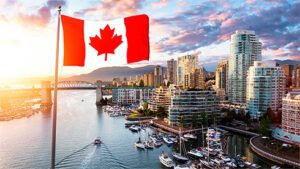 Canada’s draft federal budget for 2022 (starts July 1), presented by Deputy Prime Minister Chrystia Freeland in Parliament on Thursday, provides for the continuation of active financial support for Ukraine, in particular, the allocation of CAD500 million (almost $400 million) of military assistance and CAD1 billion (almost $800 million) loans.
“Canadians support the brave people of Ukraine, who are fighting for their lives, for their sovereignty, for their own and for our own democracy,” reads the preamble to a separate “Support for Ukraine” section of the budget, posted on the Canadian Treasury website.
According to him, at the beginning of this year, Canada announced the expansion of Operation UNIFIER, the mission of the Canadian armed forces to provide military training and support to Ukrainian forces, under which since 2015 Canada has trained about 33,000 Ukrainian military and security forces, as well as the provision of military assistance to over CAD90 million
“The 2022 budget proposes to allocate an additional CAD500 million in 2022-2023 to provide additional military assistance to Ukraine,” the draft reads.
It clarifies that Canada is already providing military assistance, both lethal and non-lethal, and is also partnering with allies to share intelligence and provide support in enhancing Ukraine’s cybersecurity.
With regard to sanctions and holding Russia accountable, the draft 2022 budget announced the government’s intention to clarify the powers of the Minister of Foreign Affairs to confiscate and dispose of assets belonging to individuals and entities under sanctions.
The document states that to date, Canada has provided CAD145 million in humanitarian assistance and CAD35 million in development assistance to provide direct support to Ukrainians affected by the illegal Russian invasion, as well as loans totaling CAD620 million to support Ukraine’s financial stability, economic sustainability and governance reforms.
“The 2022 budget announced that Canada will offer up to CAD1 billion in new credit resources to the government of Ukraine through a new managed account for Ukraine at the International Monetary Fund (IMF) so that the government can continue its activities,” the draft reads.
It clarifies that Canada has worked with the government of Ukraine, the IMF and other member countries to establish this mechanism and encourage allies and partners to participate.
In addition, Canada recalled that since March 17, it has given permission to Ukrainian refugees and their closest relatives of any nationality to stay in Canada as temporary residents for up to three years with the right to work. They will also have access to additional support such as language training and career guidance services.
The federal government is also developing a special permanent residence program for Ukrainians with relatives in Canada.
“The government has provided new funding of CAD111 million over five years with CAD6 million in subsequent years to implement these new immigration measures,” the draft states, including CAD78 million for this purpose in the draft 2022 budget.