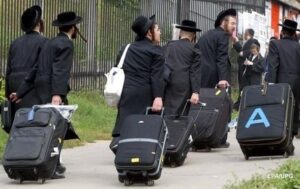 More than 120 police officers of Kyiv region provide protection of public safety and order at the Boryspil airport during the arrival of Hasidic pilgrims, the Interior Ministry’s Telegram channel reported on Wednesday.
“The police are carrying out a set of security measures so that Israelis and citizens of other foreign countries can celebrate the Jewish New Year in safety. A number of services are involved in ensuring public safety and order: Boryspil district police, patrol police, special police, explosives, dialogue police and more than 50 servicemen of the National Guard,” the report said.
There is also a Situation Center at the airport, which is also responsible for coordinating the activities of the law enforcement units involved.
As reported, this year the mass celebration of the Jewish New Year falls on September 6-8. Several thousand Hasidic pilgrims have already arrived in Uman, Cherkasy region, to celebrate the Jewish New Year of Rosh Hashanah in advance, as not everyone was able to attend the celebration last year due to intensified anti-epidemic measures. In total, the State Border Guard Service of Ukraine expects the arrival of more than 20,000 believers this year.
It is known that every autumn pilgrims go to Uman to celebrate Rosh Hashanah on the grave of their spiritual leader Nachman. He was born in the town of Medzhybizh (Khmelnytsky region now) in 1772 (5532 from the creation of the world according to the Jewish calendar). Then he led a nomadic lifestyle, visited different towns of Ukraine, mainly Medvedivka and Zlatopil, and spent the last eight years of his life in Braslav (now – Belarus). In 1808, Rabbi Nachman contracted tuberculosis and settled in Uman, where he was buried in 1810. Since then, the city has become a center of Hasidic worship, where they gather from all over the world every Jewish New Year. 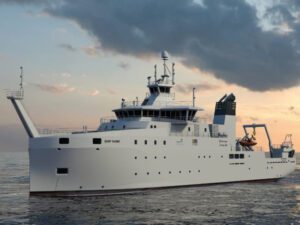 Ukraine and the Kingdom of Belgium have signed a Memorandum of Understanding in the field of water protection and reproduction and rational use of water resources.
According to the press service of the Ministry of Environmental Protection and Natural Resources of Ukraine on Friday, the document was signed by the Belgian Federal Science Policy Office, the Royal Belgian Institute of Natural Sciences and the Ministry of Ecology.
It is noted that by this memorandum, the Belgian side confirms its readiness to transfer the research vessel Belgica to Ukraine free of charge. The 1984 vessel is in good condition and has unique built-in equipment such as high-precision echo sounders.
“The protection of marine ecosystems is included in the ecological block of the EU-Ukraine Association Agreement, according to which our state must carry out regular marine monitoring in accordance with European standards. Now Ukraine is implementing the provisions of the EU Marine Strategy Framework Directive to gradually achieve a good environmental status of the marine environment. Thanks to the Belgian side for such assistance, which will strengthen the environmental monitoring of the Black Sea,” Minister of Environmental Protection and Natural Resources of Ukraine Roman Abramovsky said.
In addition, it is reported that scientific monitoring of fish stocks, fundamental scientific research on the high seas, geological exploration of the seabed, and so on will be carried out independent of fisheries.
“The memorandum provides for the strengthening of cooperation between Ukrainian and Belgian scientists on the joint study of the Black Sea, in particular the problem of raising the level of hydrogen sulfide. At the same time, the Belgian side invites Ukrainian specialists to join research in the North Sea,” the ministry added.
They note that in the near future, with the financial support of the EU project “EU for Improving Environmental Monitoring in the Black Sea” (EU4EMBLAS), the vessel Belgica will go to Ukraine under the Ukrainian flag.
“And in the autumn, a comprehensive monitoring of our sea areas will begin on board this vessel,” the ministry said.