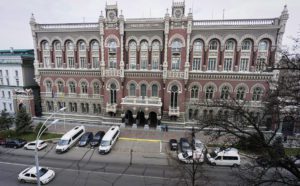 The National Bank of Ukraine (NBU) doubles the electronic limit for investments of individuals abroad to EUR100,000 per year, Governor of the National Bank of Ukraine (NBU) Yakiv Smolii has said.
“We are continuing currency liberalization. We are doubling the electronic limit for individuals’ investments abroad, to EUR100,000 per year,” he said at a briefing in Kyiv.
According to Smolii, such a decision was approved by the central bank simultaneously with the adoption of decisions on monetary policy on December 12.

The National Bank of Ukraine (NBU) estimates GDP growth in the third quarter of 2019 compared to the corresponding period of 2018 at 3.5%, according to the NBU’s inflation report. According to the NBU’s forecast, the growth of Ukraine’s GDP in the fourth quarter of 2019 compared to the corresponding period of 2018 will be 3.3%.
“According to the NBU’s estimates, in the third quarter of 2019 real GDP growth slowed down (to 3.5% year-on-year) primarily due to weaker indicators of certain basic activities,” the report said.
Thus, according to the central bank, the situation deteriorated in industry, in particular, mining and metallurgy, against the background of the further deterioration of external conditions for exporters. This, in turn, affected the performance of freight transport. The results of financial and insurance activities also weakened, primarily due to a less favorable comparison base.
At the same time, the NBU said agricultural growth rates remained high, they were supported by a significant harvest of late grains and oilseeds, which offset the lower yield of potatoes and fruits.
GDP qrowth in the third quarter was supported by consumer demand amid a significant improvement in consumer sentiment, higher wages, and pensions. This supported high growth in retail and passenger traffic, the report said.