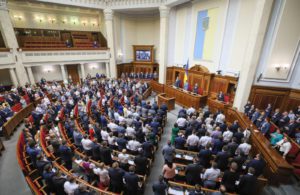 “The bill is aimed at providing additional guarantees for the protection of ownership rights in Ukraine, and provides for the removal from the market of the so-called accredited entities – nongovernmental organizations that regularly, unfortunately, performed the functions of “black registrars” and were one of the elements of criminal schemes,” one of the initiators of the bill, MP Olena Shuliak (the Servant of the People parliamentary faction) said.

The document also introduces the principle of simultaneous notarization of a legal act and public registration of emerging rights, and obliges to notarize certificates on disposing corporate rights.

In addition, the bill provides for increased liability for violations of registration procedures. 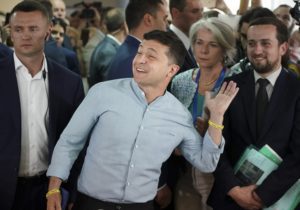 Some 130 of 199 member of parliament candidates who won majoritarian races in early parliamentary elections came ran on the Servant of the People ticket, Ukraine’s Central Election Commission (CEC) has said. Some 23 MPs, who won in majoritarian races, represent other parties, including Opposition Platform – For Life and Opposition Bloc – 6, Holos – , European Solidarity and Batkivschyna – two each, Svoboda, Samopomich, Bila Tserkva and United Center – one each.
Some 46 more MPs from majoritarian races were self-appointed and did represent any political party.
With 100% of electronic protocols processed, Servant of the People (43.16%), Opposition Platform – for Life (13.05%), Batkivschyna (8.18%), European Solidarity (8.10%) and Holos (5.82%) enter parliament. The remaining parties did not surpass the 5% barrier required for entry.
Servant of the People will receive 124 mandates according to the party list vote, followed by Opposition Bloc – For Life – 37, Batkivschyna – 24, European Solidarity -23 and Holos – 17.
The Servant of the People Party faction in the parliament of the 9th convocation will be represented by 254 MPs, Opposition Bloc – For Life – 43, Batkivschyna – 26, European Solidarity – 25, Holos – 20 and Opposition Bloc – 6. Svoboda, Samopomich, Bila Tserkov and United Center will be represented by one MP each, and there will be 46 self-appointed MPs.
Early parliamentary elections were held on Sunday, July 21 according to a mixed system: 225 candidates were elected by party lists in the state-wide multi-member constituency and 199 by the majority system (majoritarian) in single-member constituencies.
The current edition of the Constitution does not contain a requirement for the mandatory entry of a deputy to party’s Rada faction. Therefore, it is possible that in addition to factions of parties that overcame the 5% barrier, deputy groups will be created in the future parliament, which may include majoritarian deputies.
According to the law on elections of deputies of Ukraine, the CEC establishes the results of the elections of deputies in the national district and in single-member districts no later than the fifteenth day from the voting day (no later than August 5). Not later than on the fifth day (no later than August 10) from the day the election results are established, the CEC officially publishes the results in the newspapers Holos Ukrainy and Uriadovy Kurier (the list of elected deputies is published in alphabetical order).