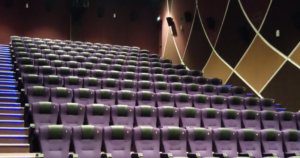 A store of Sweden’s retailer H&M, the first laser IMAX cinema and the Silpo food hypermarket will be leasers of the Ocean Mall, which opening is scheduled for late summer 2019, CEO of NAI Ukraine, the broker of the shopping center, Vitaliy Boiko has said. “The shopping center is a five-story building, where the Silpo food hypermarket and IKEA will be located at the first floor. Three floors will be retail galleries, where H&M and Inditex will be presented as well. The large entertainment zone will be over 30,000 square meters with virtual and expanded reality… The important element is the first laser IMAX cinema – the third in Europe, which will be opened jointly with Planeta Kino,” Boiko said at a press conference on Wednesday.
He said that the center with a gross area of 300,000 square meters will have 400 stores.
Boiko said that under the Ocean Mall project the investor is financing construction of an additional transport hub, which would allow unloading the Lybedska Square in Kyiv.
An electric train station will also appear near the Ocean Mall. Ocean Mall is part of the chain of shopping and entertainment centers of Vagif Aliyev. As of October 2018, he owns the following shopping centers in Kyiv: Mandarin Plaza, Lavina Mall and Blockbuster Mall, including those under construction Ocean Mall, Lesnaya Mall and Hippodrome Mall. Aliyev also owns Parus Business Center and the Diamond Hill residential complex.