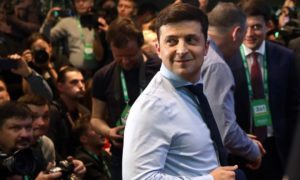 Findings of a public opinion poll conducted by the Oleksandr Yaremenko Ukrainian Institute for Social Research, the Social Monitoring Center, and the Institute of Economics and Forecasting of Ukraine’s National Academy of Sciences show that the majority of Ukrainians trust President Volodymyr Zelensky and the country’s armed forces.
According to the poll results, which were presented at Interfax-Ukraine’s office on Thursday, almost 58% of Ukrainians generally trust Zelensky, 35.1% are more likely to trust the president, and 23% of citizens trust him completely. Former President Petro Poroshenko had the trust of 15% of respondents (11.3% and 3.7%, respectively).
The Ukrainian Armed Forces enjoy the trust of more than 64% of respondents, the National Police 30.7%, law enforcement agencies 30.6%, the SBU Security Service of Ukraine 29.9%, the Prosecutor General’s Office 18.4%, and the National Anti-corruption Bureau of Ukraine (NABU) 15.3%.
Some 22.9% of Ukrainians have confidence in the National Bank of Ukraine, 14.8% in the Cabinet, 13.3% in political parties, and 10.3% in the Verkhovna Rada, Ukraine’s parliament.
The poll was conducted in 24 Ukrainian regions and the city of Kyiv on May 10-18 and involved 2,100 people. The margin of error is between 1.31% and 2.18%.